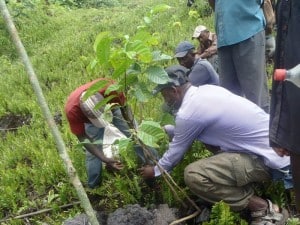 This initiative is a long term commitment of communities around the Mt Cameroon area and is being supported by the UK Charity Fauna and Flora International (FFI) and the Global Tree Campaign. The initiative aims to increase the capacity of local stakeholders within the Mt Cameroon area, where these community forests are located. The overall vision is to conserve and restore the lost populations of these threatened tree species in the Mt Cameroon community forest, whose population have reduced drastically over the last decade due to illegal exploitation.

The threatened trees species were initially sown at the SW Regional Delegation of Forestry premises in 2011 when the project kicked off. Over 20.000 seed were sown registering a high survival rate of close to 20.000. In collaboration with government services of Forestry, ERuDeF has nurtured the seeds up to maturity with some measuring up to 1metre.

Given that these community forests’ Simple Management Plans emphasize reforestation and regeneration, vast areas of land previously occupied by forests which have been turned into farmland were seen as a priority for regeneration. Using the taungya system, trees were planted alongside crops especially in the farmlands in the limits of the community forest. The trees it is hoped would eventually take over the area after some years as the farm owners simultaneously cater for the trees alongside their crops.

When the ERuDeF team arrived in Bakingili with seedlings of threatened trees ready to be planted, the community received them with a lot of enthusiasm and excitement and expressed gratitude to ERuDeF and her partner-FFI and the Global Trees Campaign.

The Forest Management Officer of the Forest of Bakingili, Elive Thomas also expressed joy in his words “We are very happy with the gesture from ERuDeF to plant these trees at the Bakingili community forest, not just because today it has become imperative to plant trees, but these trees are special because they are threatened. It is a very timely gesture given that the community forest is barely naked area with nothing to show for as trees. We will commit the community members especially those who are exploiters to plant the trees, so that they are most conscious of the implications of cutting down trees and help stop others from accessing the forest to cut trees.” He said.

During the planting exercise in Woteva, the Chief of the village, Woloko Bernard lauded the initiative and craved the indulgence of the community to embrace this opportunity firmly. “We feel privileged to have gained such a favour to be given trees to plant in our forest and farms. These trees may not be for our immediate benefit but for the children and grandchildren”.

The trees planted in these forests would go a long way to increase the value of these forests given that pressure for timber and other products in the Mt Cameron National Park will be reduced in a long term as well. Communities’ knowledge and attitudes on conserving threatened trees has been improved as most of them now understand the relevance of the species. Given that the communities better understand the value of these trees, they serve well as guards to stop illegal exploiters from adjacent communities to their forests.

In a bid to seal the collaboration between ERuDeF and these communities, MoUs were signed with the communities pledging to take good care of the trees.