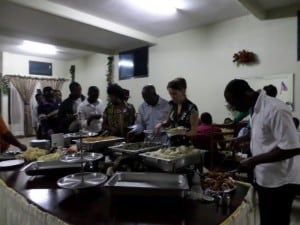 The Environment and Rural Development Foundation (ERuDeF) has officially bid farewell to the Representative of her French partner Man and Nature, Manuella Hugue. The farewell ceremony took place on Friday, June 27 in Buea in the presence of ERuDeF’s President/CEO Louis Nkembi and staff from the head office in Buea and Field office, in Menji Fontem.

Ms. Hugue who travels back to her home country France has spent 20 months in Cameroon working as Coordinator for one of ERuDeF’s project on the valorization of a local plant-Echinops giganteus in Magha on Mt Bamboutos. She was equally very instrumental in the implementation of Access Benefit Sharing in Cameroon which led to the signing of an MoU between a French enterprise and Cameroon’s Minister of Environment, Hele Pierre.

Speaking during her send-off ceremony, the President/CEO Louis Nkembi lauded Ms. Hugue for being the perfect example of a hard worker “Throughout her stay in Cameroon, she proved to be very determined. She went in for what she deemed would advance the course of conservation in Cameroon and she stood by it until it was finished”. Mr. Nkembi used the opportunity to urge staff of ERuDeF to emulate such example and remain committed to their different responsibilities and help preserve Cameroon’s rich biodiversity.

Speaking at the ceremony, Manuella Hugue said ‘Working in Cameroon and with ERuDeF was my first experience as a job and it was quite challenging. But I learnt a lot and I gained a lot of experience especially with the support from ERuDeF staff. It was such a wonderful experience.”

The French born who fell in love with the Cameroon dish ‘ndolle’ explained that having spent 20 months in Cameron, she grew tremendously working with ERuDeF and her biggest success was the fact that Echinops giganteus project became a pilot case for ABS in Cameroon. “Thanks to support from partners such as ERuDeF, Man and Nature, ABS Initiative and GIZ, the project Echinops giganteus, became a pilot case for Cameroon. Through a bottom-up system we were able to highlight and help legislation in the implementation of the ABS principle in Cameroon and now Cameroon is ahead of other countries in Central Africa in terms of ABS implementation” She said.

The Ehinops giganteus project is the first ABS project in Cameroon and the success of this project according to Ms. Hugues is due to the fact that all the stakeholders worked together at the same level. The project highlighted the local population and local NGO and brought government on the talking table in the implementation of ABS.

However, Ms. Hugue said much still remains to be done especially on the part of the government to facilitate the full implementation of ABS in Cameroon. She bemoaned the slow and expensive nature working with government services and urged the Cameroon government particularly the Ministry of Environment to speed up work and be more involved so that Cameroon can maintain the leadership position it already enjoys in ABS in the sub-region.

The 26-year-old equally urged ERuDeF who is currently the only NGO working on ABS in Cameroon to forge ahead by doing sensitization on ABS. “ERuDeF needs to communicate and show to the public that they are the leaders in ABS. They need to make the public know that if they need some help on ABS, then they need to contact ERuDeF.

The Echinops giganteus project is designed to valorize the production of the local plant Echinops giganteus. Commonly called Ayiagalem, the plant is found in Mt Bamboutos and prior to research which proved the roots of the plant has pharmaceutical and essential oil properties, the balls produced by the plant were used as playing balls by kids in Magha-Bamumbu, Lebialem Division. Mothers equally used some parts of the plant to prepare the local meal ‘achu’. The Access Benefit Sharing (ABS) is a principle of the 2010 UN Nagoya Protocol which insists that there should be a mutual benefit sharing from natural resources between the community and any enterprise willing to exploit the resource.