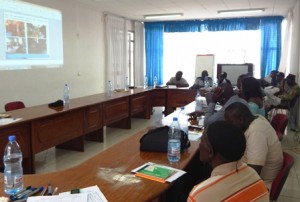 [/one_third]Some 15 agroforestry technicians have sharpened their skillson the practises of forest garden.They were trained in a workshop, Friday February 9, 2018, in Buea. Using sketch diagrams and illustrations, the Director of Agroforestry and Agricultural Development (DAgFAD) at the Environment and Rural Development Foundation (ERuDeF), Payong Marquise,demonstrated the 4 layers of forest gardening. These layers, according to Payong were; Food Crops/Agroforestry species for the first layer, Fruit trees for the second layer, NTFPs for the third layer and timber species for the fourth layer.

At this final level, the Director explained that animals could be brought in to feed on leaves of some of the species. The heights of the species, according to her training were to ascend from the first to the fourth layers.

According to the Director,the training was to ease understanding of both old and new Agroforestry field-based technicians,to embrace this concept so as to transmit to farmers in their respective networks. “We realised that even though this training has always been administered to technicians, only a few have really understood the concept. Others, especially the newly recruited technicians,are yet to grapple with the ideas. That is why we decided to create another training forum for the technicians to be able to digest the concept since they cannot transmit to their networks what they themselves don’t know,” Payong said. To her, the training is just one of the baselines which would contribute to the goal of the entire project to support the urgent food insecurity problems in Cameroon. 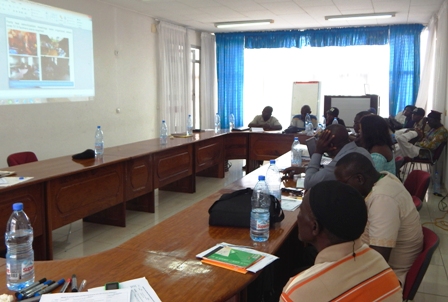 [/one_half]On his own part,the President and Chief Executive Officer (CEO) of ERuDeF, Louis Nkembi,indicated that trainings in agroforestry techniques such as forest garden, grafting, and budding, are very necessary. To him, the trainings serve as the entry point to a bigger idea of business orientation.

The CEO added that the Trees for the future project will from henceforth be more business oriented than before. According to him, all the agroforestry networks will be further transformed into self-operating cooperatives. He recalled that the project’s target is to increase income at the household levels.

The technicians promised to bring all that they have learned to their farmers. They promise to be good ambassadors of the Agroforestry programme, in their respective areas of operation. “We have never practised Forest Gardening in Menchum. After learning this wonderful technique, I think my farmers also deserve to be trained. So, I promise to bring this information to all my farmers in Menchum,” Kum Nicolas said.

Technicians also expressed lots of interest having heard of transforming networks into cooperative. “We don’t only want to support our livelihood needs but also want a system which will help us function independently of ERuDeF,” Said,Ayong Thomas of Momo network.

Agroforestry is a project of the Environment and Rural Development Foundation (ERuDeF), and the US based Trees for The Future Foundation. It is aimed at supporting the urgent food insecurity problem in Cameroon. It works with farmers and field-based technicians all over 4 regions of Cameroon.