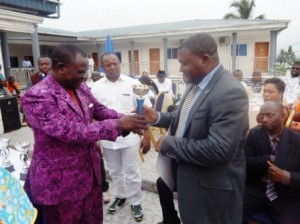 [/one_third]The Environment and Rural Development Foundation (ERuDeF) has been awarded by the The Guardian Post for championing environmental protection campaign in Cameroon. The award was received by ERuDeF’s President/Chief Executive Officer, Louis Nkembi , alongside some staff, during The Guardian Post’s Annual Award at the Musango Beach Resort-Limbe last February 17, 2018.

According to The Guardian Post’s Publisher, Christian Ngah Mbipgo, the award is a token of encouragement to those, who have excelled in their respective fields of life thereby contributing to nation building and peace crusading. Corroborating Mr. Ngah, the Chairman of the Award Committee Peterkins Manyong, said the choice of the laureates was not by luck or favour. “They were voted by Cameroonians who identified the great work they have been doing. Such award is therefore an encouragement for others to work much harder. It is to inspire others by recognizing those who have done great work and have been recognised by their communities,” he clarified 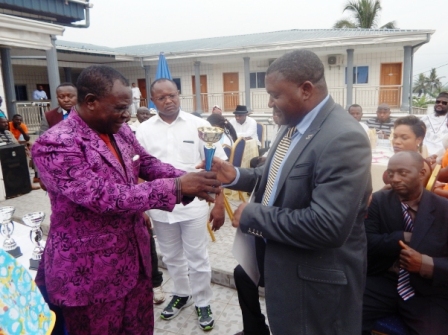 [/one_half]Though unexpected, the award was received with lots of joy by the President/Chief Executive Officer of ERuDeF. “It was a great surprise to me when a journalist from The Guardian Post Newspaper came to my office and informed me that ERuDeF has been nominated for this award. It’s really exciting to know that someone somewhere is seeing the great work we are doing in conserving biodiversity and protecting fragile environments in Cameroon. I am indeed grateful to The Guardian Post and to God for this award,” he added.

Mr. Nkembi, expressed profound gratitude to his staff and partners, for the great work and support that has earn the organisation such an award. He said the award is also coming as an encouragement to the organisation to continue to improve quality of lives by putting smiles on peoples’ faces through the implementation of integrated conservation and development programmes focused on species conservation.

ERuDeF is Cameroon’s leading conservation non-profit organisation created ERuDeF in 1999, with the mission of conserving wildlife and protecting fragile environments through research, education and community engagement. Some 19 years down the lane, ERuDeF prides itself as the first ever national NGO to have facilitated the creation of a protected area in Cameroon, the Tofala Hill Wildlife Sanctuary, with others underway. The organisation is also credited, among others, for facilitating the launching of Cameroon’s pilot Access and Benefit Sharing Initiative, which culminated in the signing of the first-ever Mutual Agreement Terms (MAT) in the Central African sub-region.