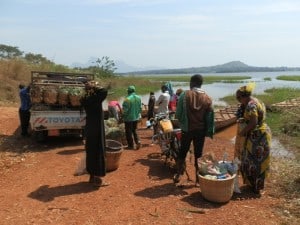 They were displaced when the Baminjim Dam was constructed and its waters flooded the Ndop plains, submerging homes, farmlands and raffia bushes. Thirty years after, the complexity of this dire situation makes a visitor to the Bambalang islands feel the paradox of development imposed on a people who feel desolate.

Death by drowning, mosquitoes and mosquito-related diseases have emerged in Bambalang islands and their environs since 1974 after the construction of the Baminjim Dam in Kwotamo, Noun Division, West Region.

Seven tiny islands are the only highest points left in the plains of Ndop in Ndop Central Sub-division, Ngoketunjia Division, North West Region, after the waters of the Baminjim Dam flooded a large area of Bambalang, giving birth to a new vastness of water called Lake Bambalang.

The lake seems to violate a deep sense of identity most Bambalang natives cherish – their bond with the soil – a bond so potent that they see themselves as refugees demoted to deserted island.

It took a week for Lake Bambalang to form. As it grew in size, it washed away homes, farmlands, and raffia bushes. The people, mainly farmers and palm wine tappers, were suddenly surrounded by a vast body of water. In no time, the Bambalang villagers were disconnected from their kith and kin, traditional livelihood sources and social amenities. With their farms and raffia bushes under deep water, the cut-off villagers were left with little choice but to learn to fish.

In interviews conducted by The Green Vision on Mbissa Island, the largest and most populated man-made island, the farmers-turned-fishermen expressed concern about how they have since been treated by the government, an issue that has led to several deaths by drowning in the expansive lake, and agony from mosquitoes.

The islanders say they want comfort just as much as anyone else since they lost much of their farmlands to the lake.

“We have had too much to lose. What we enjoy now is risk bearing,” said Njindam Daouda, the traditional ruler of Mbissa Island.

About 3.000 people live on Mbissa Island, one of seven islands that include Befugeh, Keshi, Semou, Mono, Nambere and Tungunu, all populated with isolated people, some of whom received as little as 25.000 francs cfa, others 480.000 francs cfa as compensation.

On these islands, where poverty has been rising and most of the islanders live without clean water, no proper means of transport and medical care, neglect is hard to ignore.

Some media reports claim government created a residential area for the relocation of those displaced by the Baminjim Dam waters but actual construction remains uncertain.

“There was never any plan executed to relocate those displaced by the flooding waters of the Baminjim Dam,” Zachary Fru Nsutebu, retired town planner, told The Green Vision.

“As soon as the dam began overflowing, I was summoned to Bambalang. I merely did virtual planning, in situ, but there never was any real activity such as construction of infrastructure to relocate the persons displaced by the forming lake,” Nsutebu said.

The nearby Baminjim reservoir, however, was never constructed with irrigation in mind or with other clear integrated uses as the Ndop rice fields are upstream. Nonetheless, the marooned Bambalang natives recall how they benefited from the man-made lake, which offers the Bambalang carp and black tilapia species of fish, mud fish and tadpoles.

“Between 1985 and 1996, we enjoyed a lot from fishing; we also made much income from selling smoked fish,” Daouda said.

Although the villagers were forcefully converted to fishermen, they still grow crops like maize, beans, groundnuts, tomatoes, pepper, yams which they transport by canoe to Bambalang market on the mainland.

But there is more bad social news on the Bambalang horizon.

“The islands became convenient breeding grounds for mosquitoes and the rate of malaria infection in and around the islands increased,” said Ndimu Bertrand, an indigene of Bambalang. Besides the torment from mosquitoes, the villagers often drown while fishing or crossing to or from the island in paddle canoes.

At least a dozen people die yearly in the man-made lake that surrounds the seven islands of Bambalang.

“A few years ago, two Social Democratic Front (SDF) militants died in the lake. They were crossing to carry out political campaigns in the island area,” said Ndimu.

“Last year, 17 people died in the lake. A six-year-old boy just drowned in the lake and we are waiting for his corpse to surface,” Daouda told The Green Vision.

These deaths by drowning tend to scare off people who are sent to supervise vaccination drives or election campaigns in Mbissa.

According to Daouda, there is no place for the islanders to relocate; some people escaped to the West Region and the lake may continue to expand, yet the Mbissa Island and the others are infested with filaria and river blindness.

“There is still no electricity and we do not have clean drinking water,” said Zacharia Kwenwi, a motorcyclist who buys palm wine from Bambalang mainland and sells it on Mbissa Island.

In 2013, Daouda said he wrote to the Prime Minister’s office concerning electricity, connection to the mainland and compensation for submerged property and farmlands.

“We only received promises for solar panels, but till date, we haven’t seen anything like solar panels,” Daouda said.

Lake Bambalang also gave birth to a new breed of bandits; fishnet thieves. In November 2014, a notorious youth was caught trying to steal a net from the lake and was summarily executed and his corpse burnt to ashes.

As for infrastructure, the Bambalang islands remain perpetually backward.

According to Ndimu, it is just about three years ago that a secondary school was created in the area.

“Before, most of the inhabitants had to either remain illiterate or risk crossing the mighty lake to study in GHS Bambalang or in Bamum in the West Region. A health centre was, however, constructed here some 15 years ago thanks to the advocacy work of late Dr. Ghogomu Amida,” said Ndimu.

Claims by government authorities that some of the displaced Bambalang villagers refuse to relocate to sites developed for them are often refuted bitterly, as it happened during the floods of 2013 that ravaged Babessi along the Bamenda Ring Road.

The floods were said to have emanated from the Baminjin Dam site.

The Senior Divisional Officer for Ngoketunjia, Valerie Kwela, had expressed disappointment at the Babessi flood victims ‘who refused to move from the area to a site, which government had newly developed for them a few kilometres on the outskirts of Babessi.’

Media reports, however, said the villagers complained that they could only settle there if water, electricity, and good living houses were made available on the said site.

With their lands lost, their traditional practice of farming gradually fading, and with much of their social needs out of reach, the Bambalang island dwellers hope that one day government will turn its attention to them, get them out of harm’s way and grant them better living conditions.

Mbissa Island has only one health centre with no resident doctor – there are only two doctors in Bambalang. There are two poorly equipped primary schools and a secondary school that is just four years old.

A system of a really rapid, safe transport which cannot be a danger to commuters on Lake Bambalang must be straightaway devised and as speedily as possible launched; social amenities such as electricity; better staffed and equipped health centres must be put on the islands without any delay.