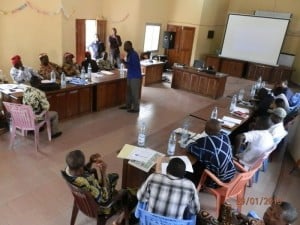 The Cameroon segment of the programme to lead communities to map customary lands and resources in the Congo Basin was launched January 30, 2015 in Nguti, Nguti Subdivision, Kupe-Muaneguba Division.

At the official launching of the land use mapping programme, AJESH CEO Harrison Ajebe Nnoko Ngaaje said the project is driven by the fact that forest communities in the Congo Basin have been found to be largely invisible on official maps, and therefore have virtually no formal rights to land.

“Governments in the Congo Basin have allocated much of the land to timber companies or created conservation areas with little regard to the rights of the communities living in and adjacent to these forest concessions and conservation areas,” Nnoko Ngaaje said.

In addition, expansion of agro-businesses, infrastructure development and mining ventures are posing more threats to the communities as well as exerting further pressure on forests, land and livelihoods.

The new participative management strategy being developed to provide an opportunity to give forest communities a voice in forest policy development through community-led mapping of customary lands and resource rights and build legal capacity to support communities’ rights, would attract some 23 villages in Nguti Subdivision.

Five of the villages have already carried out the resource mapping of their forests.

“It was quite an exciting experience not only because we learnt to use the sophisticated GIS gadgets, but we also discovered new things in our forests such as caves which we had hitherto not known that existed,” said Mbongaya Patrick from Ekenge village.

The land use mapping exercise was also a whole new incident for the chief of Ediengoh, Njah Akpo George, who decided to learn how to use the GIS and collect data on their resources.

“At first, it seemed strange to us but now we have seen how useful it is to know where all our resources are found,” said Chief Njah Akpo.

The representative of the chief of Nkwenfor village, Eko John, who also participated in mapping out the resources of their village, encouraged other villagers to take up the challenge and “possess a land use map that will empower you and give you better bargaining advantage.”

The Mapping and Forest Governance (MFP) Programme was designed with evidence that securing traditional land and resource rights is one of the most effective ways of reducing poverty in forest areas and combat deforestation, which consequently would slow climate change.

“Until recently, there have been few formal mechanisms that allow for participative forest management. Clarification of tenure has been recognized as a cornerstone of good forest governance and as a means to enable responsible investment,” says the programme on Mapping and Forest Governance in the Congo Basin.

The programme features community mapping of customary rights and resource use and other techniques that promote the participation of indigenous peoples; development of icon-based software on GPS-enabled tablets to facilitate participation of non-literate people; correction and validation of GIS data in villages and agreement on data-use protocols and community strategies to ensure firm ownership of the process in the hands of the community; collection of data on a range of social development indicators, enabling mapping of communities’ development needs, among others.

The programme also hopes to accurately illustrate the extent of existing occupation and traditional tenure of forest lands throughout the Congo Basin.

It would also provide a basis for national and sub-national forest land planning and zoning; illustrate where conflicts of use or rights already exist or could ensue, inform programmes and laws to reform or clarify forest tenure rights, including development of community forest policies, provide a basis for assessing and implementing payments to communities for reducing emissions from deforestation and forest degradation (REDD) or payments for ecosystem services and other development interventions as well as assist in monitoring compliance with international and bilateral agreements or treaties on the rights of indigenous peoples.

It is estimated that over 50 million people depend on the Congo Basin rainforest for their wellbeing and livelihoods and as many as 700.000 indigenous hunter-gatherers (Pygmies) who are still partially nomadic, yet these groups constitute the most disenfranchised and poorest people on the African continent. Many of these people lack basic social amenities and often do not benefit from the exploitation of the forest areas they inhabit.