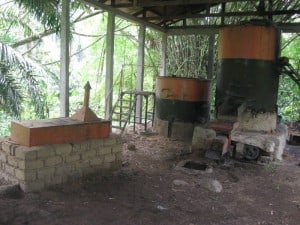 A modern oil mill has uplifted the livelihood of the inhabitants of Essoh-Attah one of the villages in the proposed Mak-Bechou wildlife sanctuary in Lebialem Division, South West Region.

The oil mill was donated by ERuDeF in 2012 and installed within the framework of the French Charity Man &Nature-sponsored projects.

“Thanks to this oil mill, we are now able to produce 24 tins of palm oil from seven tons of palm nuts,” said Ebe Bernard, Coordinator of the Essoh-Attah Oil Mill.

Ebe Bernard explained the processes of oil production. Nuts bought from village farmers are weighed and filled into boiler where cooking under intense heat is done for about four hours. The cooked palm nuts are transferred to the grinding machine where grinding and extraction of the oil is done for about six hours. Ground oil is transported manually using buckets into the next cooker for another five hour cooking period. The cooked oil is then collected and filled into containers ready for the market. It should be noted that oil at this stage is collected in four stages with each stage depicting the purity level of the oil. Oil collected from stage one is ready for consumption while oil from stages two, three and four is sent to the dryer to cook for about ten minutes again.

“So that is the process, the reason why we cook the oil for long is to ensure that the oil is purified and that the final consumers get the best. We store the prepared oil in the safety tank as you can see there and wait for ERuDeF to help us transport to Dschang for commercialization,” Ebe explained.

Ebe also disclosed to the GV that they still face the challenge of fraud in the business; a kilogram of fresh palm nuts cost between 45 and 60 francs cfa so some unscrupulous villagers mix fresh nuts with spoilt and/or already used nuts during weighing just to increase the number of kilograms. This has a negative bearing on the overall productivity because according to Ebe Bernard, seven tons of fresh palms should produce at least 40 tins of oil.

“To check this fraud, I have decided that palms be spread on a table and properly checked before weighing is done. It’s true this is time consuming but I think it is worth it,” Ebe said.

Before the coming of the oil mill, villagers produced oil manually using their feet to smash palms. The fact that the manual method was long, tedious , less profitable and even less hygienic cannot be overemphasized. Most of the villagers testified that the oil mill has not only boosted palm oil production in the area, but has also encouraged farmers to engage in the cultivation of palm nuts since they now have a steady market. ‘I am very excited each time the palm harvest season is approaching because I know I am going to make a lot of money from selling my palm nuts. Palm harvest season is from November to April and I use that period to raise enough money to take care of my family throughout the year. Before, we used to suffer a lot to transport our palms to the market, especially with the bad roads, but now, we don’t have to strain a lot, most often the ERuDeF vehicle even helps us transport the palms from the farm to the oil mill where weighing is done. I think this oil mill is a blessing to this community’ testified Mbe-Nkem Chap Jerome, a farmer.

Apart from the oil mill, other ERuDeF projects in Essoh-Attah like the Microfinance Scheme, the agro-forestry and education programs have also impacted the lives of the people. In a recent visit to Government Technical College Abebue, where a tree nursery was established and environmental education done, this reporter noticed that not only was the school campus very clean, but trees from the nursery had been transplanted on the school campus and were doing quite well. The principal of the school, Njang Valentine said that the didactic material and other educational support offered them by ERuDeF has facilitated the teaching process and has encouraged most parents to send their children to school. The principal expressed happiness following the gazettement of the Tofala Hill Wildlife Sanctuary and promised their relentless support to ERuDeF conservation efforts in the area, so that the proposed Mak-Bechou wildlife sanctuary can also receive full protection status.

The situation was not very different at the Government Primary School Abebue, where the class 4, 5 and 6 pupils were able to repeat some of the environmental messages taught them by ERuDeF education teams. The next and last stop was at the micro-finance building where the secretary, Forkalem Joseph revealed that they have a few registered members. Giving a general appraisal on the impact of ERuDeF’s projects in Essoh-Attah, Forkalem Joseph said ERuDeF has helped boost the socio-economic life of the people and they are grateful.