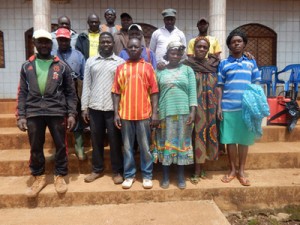 Some 90 farmers cultivating around the Mt. Bamboutos landscape, have abandoned their traditional shifting cultivation system of agriculture, for agroforestry farming system. They took the oath, March 2018, after they were sensitized on the devastating effects of shifting cultivation practices on biodiversity.

According to the farmers, they engaged in shifting cultivation because the soil nutrients of their farms easily died out after a season. To them, after the sensitisation, they would be able to plant agroforestry trees in their farms so as to boost their soil nutrients.

“We are happy to learn that you can cultivate in your lone farm for many years. Giving that we shall double our yields with the coming of the agroforestry technique, I think we shall not practice shifting cultivation. We have all accepted to have the agroforestry farming system as our main agricultural practice,” Jean Ngankam, a farmer from Mezat village. 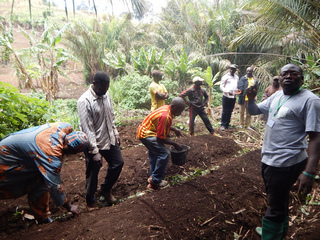 The farmers attested to the fact that the trainings they received, coupled with the empowerment, have encouraged them to completely abandon shifting cultivation, in favour of agroforestry system of agriculture.

“We are very happy to receive the different seed species. We shall plant them in our farms, and witness how much we shall reap. We shall cultivate variety of crops with the integration of economic, timber and medicinal trees in our farms,” said Nanque Victorine, a farmer in Bamumbu.

While sensitising the farmers, the Agroforestry Coordinator for the West and Littoral Regions, at the Environment and Rural Development Foundation, Ngome Emmanuel, said “The fact that Mt Bamboutos is the second watershed in Cameroon and harbours some endemic species of fauna and flora which are gradually being extinct have increased more concern for environmentalist worldwide.”

He beckoned on the farmers to continue practising the Agroforestry system of Agriculture, hence, shunning away from those traditional practices that facilitate the degradation of the Mt. Bamboutos landscape.

“Close to 100 peasant farmers have been sensitised and trained on agroforestry techniques since February. We have distributed close to 1 million agroforestry seeds, medicinal and timber species of Acacia, Leucaena, Prunus africana and Mahogany to these farmers,” he added.

The International Union for the Conservation of Nature (IUCN) and the Environment and Rural Development Foundation (ERuDeF) galvanised their expertise and resources to remedy the fast degradable Mt. Bamboutos. Since the occupants of Mt. Bamboutos are peasant farmers specialised in shifting cultivation. Their activities have rendered the entire mountainous zones void of trees and wild animals. These have exposed the mountain and other physical geographical features under the hot scorching sun that gave negative effects on the Mountain hydrology.

IUCN and ERuDeF, through the PPI5 project on Mt. Bamboutos, decided to ameliorate not only on the biodiversity of Mt Bamboutos, but also decided to improve on the farmers’ livelihoods, through the diversification of their ways of cultivating. They introduced a sustainable system of farming known as Agro forestry.

According to research, the integration of diverse species of trees in farms around this magnificent Mt. Bamboutos, has been seen as the only way of restoring the biodiversity lost in this rich mountain ecosystem.