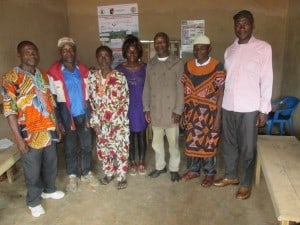 A file including necessary documents for the legalization of the Alou-Tofala Cassava Farmers’ Cooperative (ATCaFCoS) has been constituted and will be deposited at the Lebialem Divisional Delegation of Agriculture and Rural Development for onward transmission to Regional Delegation of South West for final registration in the days ahead.

This is the outcome of a constituent General Assembly organized recently at Fossungu, in Alou Sub Division, Southwest Cameroon by the Environment and Rural Development Foundation (ERuDeF), involving all 24 founding members.

Aimed at following up the legalization of ATCaFCos, shares were advertised at fcfa 10000 per share to generate initial capital for the Cooperation with all 24 founding members buying at least a share. Meanwhile, the articles of association were reviewed and adopted pending the deposition of the initial capital receipt at the bank so as to compile the final documents.

At the end of the GA, ERuDeF’s Junior Economist, Mr. Njang Quddus, assured cooperative members that the cooperative will go operational in no distant time, and the local communities will benefit from all its services.

This news was greeted with joy by the founding members.

“I am very happy with ERuDeF’s efforts in facilitating the creation of our Cooperative. We are very happy to know that our long awaited cooperative will soon open its doors” ATCaFCoS President, Mr Ngunyi Peter said promising to ensure the effective management of the cooperative when it eventually goes operational.

The meeting brought together ERuDeF and MINADER representative, 24 founding members of the cooperative and the Chief of Section in charge of Cooperative in Lebialem Division.

The creation of cooperative enterprises is in line with ERuDeF’s Community Conservation Social Enterprise Development (CoCoSED) Model, an initiative aimed at providing funding opportunities to local communities as a way of improving their livelihoods, scaling up development and diverting communities’ attention from the forest.