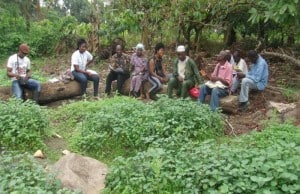 More farmers are turning to the Forest Garden System of crop growing as it promises immense benefits in high yields and higher incomes all year round.

On February 25, 2015, a new set of low-income farmers resident at Mile 16 Bolifamba in Buea, Fako Division, South West Region, signed a memorandum of understanding (MoU) with ERuDeF team of agroforesters to adopt the Forest Garden System.

The MoU launched the farmers into a four-year deal to improve on their yields and incomes through the forest garden system.

ERuDeF is promoting the forest garden system in the rural areas.

The Bolifamba farmers formed themselves into a group known as the Bolifamba Young Farmers, which would metamorphose into a network, and then a cooperative.

ERuDeF’s agroforestry experts will train these farmers on Forest Garden System techniques and their importance; provide them with seeds of the natural fertilizer and fruit trees to be planted. The farmers are required to collaborate and set up the nursery, transplant the crops to their farms and nurture the trees as will be instructed by ERuDeF agroforestry specialists.

They are also expected to optimize their farm areas so as to maximize harvests and consequently improve on their incomes.

The farmers received lessons on alley cropping, live fencing, contour planning, windbreaks, and fodder, which are all Forest Garden techniques.

Martin Ageh said he doesn’t regret signing the MoU with the ERuDeF agroforestry specialists because he believes the project has come with good innovations.

Another farmer said they suffer during off-seasons and would gladly respect his part of the bargain so as to benefit from the improved produce from his farm.

A nursery should be 1m-1.5m in width and the planting furrows should be across the same length. A nursery should also have water and road accessibility. The farmers were also encouraged to pre-treat their seeds with water at room temperature in the night then remove in the morning for planting. Three months later, the seeds would be ready for transplanting.

The Forest Garden System is expected to ensure improved incomes all through the year since crops that rake in high incomes do not yield at all times in a year. Hence, during the non-profit period (off-season) the fruit trees will provide incomes for the farmers. Besides having enough natural fertilizers for their farms, the farmers will also enjoy food security, balanced and nutritious diets without incurring much cost throughout the year.

Medical tree species like Moringa and Prunus africana will benefit the farmers and the communities. Wood for fuel will never be a problem since the farms will contain a diverse number of trees.

The Forest Garden System is phased in a period of four years during which farmers will greatly benefit from all the different types of nitrogen-fixing trees, fruit trees, timber and non-timber species. These phases will increase yields and income.

• The first phase encompasses the nitrogen-fixing and medicinal trees, which will be planted in the first year. This phase is made up of Acacia, Calliandra, Leucaena, Sesbania, Prunus africana, Tephrosia, Moringa and Neem. Most species in this phase are fertilizers and they need pruning after every 2 to 3 weeks. The leaves are spread all round the farm to serve as manure to ensure better yield. The nitrogen-fixing trees should be in their maximum and should be planted 20cm between each other in a zigzag form to allow space and live fencing.

Phase three consists of perennial fruit trees like mangoes, pear, plums, coffee, cocoa, goats, sheep, pigs, fowls, guavas, oranges, Kola nuts (Atara) and animals, as well as fowls. These animals feed on Acacia and Leucaena of phase one. Thus, little or no expenditure will be incurred in the upkeep of the animals.