Cameroon kids stand up for rhinos 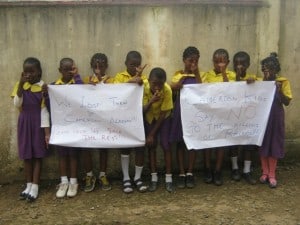 Kids belonging to some primary schools in Buea, SW Cameroon, have urged the world to do all it takes to stop the killing of the rhinoceros. The children made this call during celebrations marking the 2013 edition of the World Rhino Day in Buea SW Cameroon on September 19 ahead of the September 22 celebrations of the day. The commemoration was organized by the Environment for Sustainable Development Program of the Environment and Rural Development Foundation (ERuDeF). It drew pupils from some primary schools around Buea who sent out powerful messages to the world on the need to protect the rhinos. Some of the messages included “If you say you love us, then stop the killing of rhinos” “Stop the killing of the rhinos, we lost them in Cameroon already, so help us save the rest”. During a question and answer session these kids belonging to the age bracket 9-11 acknowledged that rhinoceros just like other wildlife species are interesting creatures which must be protected for posterity. One of the kids in the Jamadiale Nursery and Primary School Bonakanda, Nkeng Rawlings said “we love animals. We would also love to continue seeing the animals in our forests, so people should stop killing them”. The kids were saddened by the fact that the rhinos got extinct in Cameroon in 2011 and used the opportunity to call on the global community to fight the killing of rhinos.

Just to note that one of the species of rhino-the Western Black rhinoceros resided primarily in Cameroon, but recent surveys have failed to locate any individuals. In 2011 it was officially declared extinct by IUCN. ERuDeF is using this opportunity to say a big thank you to all those who are putting their voices together to stop the killing of the rhino and to wish them a happy world rhino day.