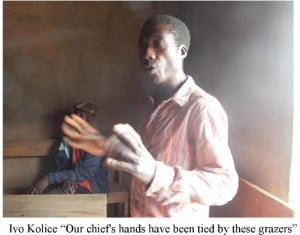 Huge technical inputs have been invested to implant the Forest Garden System in the Northwest Region, yet cattle graziers seem to be bent on upsetting the technique that could easily increase agricultural productivity in rural communities. Kiloce Ivo says he has lost huge amounts of his farm produce to cattle intentionally driven to feed on his crops.

“We have been to our chief several times requesting for permission to kill these animals whenever they encroach into our farmland, but he keeps refusing,” Kiloce laments.

This was one of the several grievances presented to the team of technicians of Trees for the Future Cameroon during a trip aimed at evaluating the success rate of the Forest Garden System introduced in all seven Divisions of the Northwest Region in 2015.

Bongom village is located in Nkambe, Donga-Matung Division. It is one of the several communities that has benefitted from the training offered by Trees for the Future Cameroon. Just like several other communities in Menchum Division, the general cry of farmers borders on stray animals and pets that destroy farm produce.

Kiloce, a beneficiary of the Forest Garden System training, says despite the great effort they put in their farms yearly, their productivity is often compromised by the wanton destruction of their crops by cattle left uncontrolled by Fulani herders living in the community.

He decries the lukewarm attitude of their community leaders in addressing the problem, saying the herders have corrupted their chief.

“Our chief should have been able to give us the authorisation if he has not been corrupted by these wealthy cattle owners. Last year, I lost a big portion of my farm produce to these animals that are deliberately directed into our farms by their owners,” says Kiloce.

Despite the growing farmer/grazier conflict, members of the Bongom Farming group have embraced the Forest Garden concept, hoping it will go a long way to improve on their agricultural productivity.

The model forest garden concept entails establishing a forest garden which serves as reference for all members of a farming group. Through the concept, farmers have access to resources like seeds, training, samples and success stories in several farming practices and why other practices tend to fail.

They also undergo training in the various stages of setting up a forest garden.

An evaluation of the forest garden model implemented in previous years revealed a remarkable success rate in all seven Divisions, under very challenging circumstances.