Meme Agroforestry Farmer’s Network To Be Trained In Agribusiness 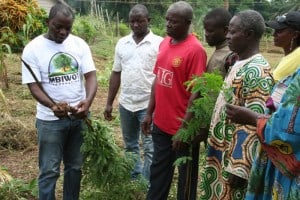 In an effort to help farmers stand on their own and be an autonomous body, the Cameroon Program of US Charity, Trees for the Future will be training farmers belonging to the Meme Agroforestry Farmers’ Network on how to develop agribusiness. The training will be given to them in November 2014 by Lauren Jessup, a US Peace Corps working for the charity in Cameroon.

The Meme Agroforestry Farmer’s Network comprises of over 10 farmer’s common initiative groups in Meme Division, South West Cameroon with the common goal of incorporating trees into their farmlands.

With the technical support of Trees for the Future, farmers belonging to this network have been practising agroforestry for over 5 years. Using the leaves of some tree species such as Caliandra and Acacia, they have been able to improve the quality of their soil and at the same time increased yields.

The farmers expressed desire to take farming to another level by engaging in agri –business development. This new vision is in line with the Government of Cameroon policy of ‘Second Generation Agriculture’

The first big project they intend to engage in is the chilli pepper project which involves the transformation, processing and large scale marketting of fresh peper.

With such innovation, this network which was reorganised early 2014 with a new exco could be said to be waxing stronger than ever before.

After the elections, the network has picked up tremendously and now meets every forth night with at least one training session every meeting.

In their plan of action for this 3rd quater, they have ear marked trainings on the growing and processing of Moringa, composting, grafting, marcotting, aquaculture amongst others.

According to the President of the network Mr. Eseme, the revival is due to a number of factors. In a discussion with the TREES Cameroon representative, he revealed that the new exco was more vibrant given that women and youths were adequately represented. ‘Truth be told, the women have been very instrumental in bringing the network back to life’. The youth wing is also very vibrant”, he said. ‘They have come up with a good project proposal for the production and sale of chilli pepper and the exco will convene in mid October to review strategies to raise money for the project”. He continued. ‘We are also thinking of setting aside targets in terms of the number of trees to be transplanted by each CIG given that tree planting is our primary activity”.

Simply put, he recommended good governance, internal competition and steadfastness for any network that seeks to grow.