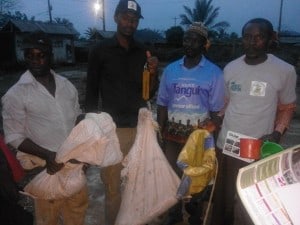 Over 7.4 million agroforestry seeds have been distributed across some 513 farmers in 72 farming groupsacross15 Divisions of the Northwest, Southwest, West, and Littoral Regions. Regional Coordinators of the Department of Agroforestry and Agricultural Development in the Environment and Rural Development Foundation (ERuDeF) distributed the seeds in March 2017 during a one-month tour across ERuDeF’s four Regions of agroforestry operations.

The seed species donated comprised of Acacia, Leucaena, Calliandra, Prunus and Moringa.Of the 7.4 million seeds distributed, the Northwest Region received about 3.6 million, 1.9 million to the Southwest and finally 2.1 million shared across the West and Littoral Regions.

The tour, which is one of the Department’s key activities for the first quarter of 2017, was aimed at sensitising farmers on new agroforestry techniques and to establish nurseries. During the sensitisation meetings, emphases were laid on the new Training and Extension Model and on the Institutional Development of Agroforestry Farmers Network for better understanding.

As of now, 81 nurseries have been established with over seven million seeds nursed.The rest of the seeds are scheduled to be nursed in the months ahead.

Receiving the farm inputs and tools from the ERuDeF team, representatives of farming groups lauded the great strides ERuDeF is making in equipping farmers committed to the agroforestry practice, with the necessary tools needed to ease their job.

“We are so grateful for these seeds and farm tools ERuDeF gives us on regular basis. These inputs really aid our work. We have also been served with a lot of capacity building workshops, and demonstrations of how to plant agroforestry trees. All these things are done to us for free. We thank the management of ERuDeF, but we believe the special grace of God will continue to bless her so she can continue to put smiles on people’s faces,” Mboh Thomas of Batcham, representative of a farming group in the Northwest Region said.

They restated their determination to plant as many agroforestry trees as possible, and also to bring in more farming groups.

“We have as target to plant 3 million agroforestry trees this 2017. We, the farmers are not relenting our efforts. Our strategies cut across continuous sensitisation in our farming groups, planting as many trees as our farms can take, to name but these. We are determined to plant the trees together with other farmers in the other Divisions of Cameroon,” Mr Temzi Jean, technician of Menoua Division stated.

They also expressed gratitude to ERuDeF for distributing seeds of agroforestry tree such as Accacia, Luecaena and Prunus, among others.

“We are so grateful with the management of ERuDeF for accepting us into the agroforestry network. We shall join the many who are already there, to produce the required results. Just to indicate that we are determined to meet the 2017 goal of the Agroforestry Department, being to plant 3 million trees,” Mr Atem Ben, representative of a new farming group in Malende, Muyuka.

In collaboration with Trees for the Future, ERuDeF through its Department of Agroforestry and Agricultural Development, build the capacity and empower farmers across Cameroon on modern techniques of practicing agriculture, using agroforestry. The second quarter tour shall be dedicated to nursery monitoring and evaluation, including bare stem transplanting.