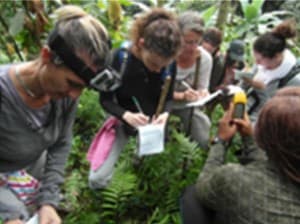 [/one_third]Created in 2008 to improve and build the capacity of Cameroonian graduate students known as the International Volunteering Programme {IVP}, it has within a period of nine years grown from a small national initiative to an international program. The number of participants in the program has greatly increased from a few per year in 2008 to over 50 students and enthusiasts in 2017.

The internationalisation of the program has brought huge benefits to Cameroon and Lebialem Highlands specifically. Previous volunteers have been able to take by new roles of liaison to build new fences and partnerships.

These partnerships have been able to mobilize substantial resources that have enabled ERuDeF to support the creation and management of key biodiversity sites like Tofala Hill Wildlife Sanctuary and the proposed Mak-Betchou Wildlife Sanctuary.

Such contributions urged the ERuDeF Board in a meeting recently, to confer on these volunteers the title “Conservation Ambassadors.” Dr. John Daniels has been instrumental in the creation of the ERuDeF UK while Chris Jerkinson supported the cost of one staff etc.

Within the last nine years, the Environment and Rural Development Foundation (ERuDeF) has received hundreds of volunteers from Canada, United Kingdom, United States of America, Australia, Netherlands, France, South Africa and Asia. They come to support research, raise awareness and contribute towards the protection of Cross River Gorillas and Chimpanzees in Cameroon

The volunteers during this period, also plant trees to regenerate and protect degraded landscapes. This part of the volunteering is usually very consoling especially when one looks at the indispensable role of trees in global warming mitigation today.

“Being a banker for many years, this expedition gave me the opportunity to express my love for nature and to do something that will impact lives. So I felt I will leave a better legacy by helping people to preserve an environment which is under attack from pollution, global warming, poaching, logging and many others” Irish volunteer, Tony Malone remarked after planting trees in the Lebialem and Fako Divisions, Southwest Cameroon.

These volunteers, who are ERuDeF’s ambassadors of this initiative in their respective countries, have gone beyond contributing physical and voluntary donations to becoming global ambassadors of the program by raising the international profile of the program and major international funding. Their international drive has led to the funding of more-on-the- ground projects like the construction of two semi-giant palm oil hydrant mills, amphibians research at Mount Nlonako which culminated in the establishment of a distribution map of the Goliath frog in this area, the creation of UK branch of Cross River Gorilla Project, school children support in Tofala and international board of Trustees amongst others.

The International Volunteering Programme receives volunteers between the ages of 18 and 70 from all over the globe. They spend several weeks and months supporting the conservation of wildlife and other forms of biodiversity in Cameroon.

There are increasing number of returns and volunteers joining the ambassadors’ program.

As we celebrate the 10th year of this program in 2018, the international volunteering program has been renamed as “The International Biodiversity Expedition” and will henceforth be managed by the ERuDeF Institute of Biodiversity and non-profit studies. The core support for this programme is coming from the African Conservation Foundation (ACF).