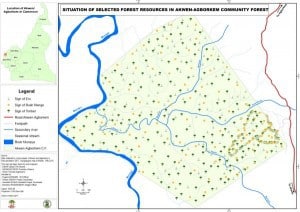 Today, it becomes more than important to integrate communities in the management of forest resources. Communities living within forest areas, are meticulous in acquiring deep knowledge of where they live; the dense forest milieu.

The Environment and Rural Development Foundation (ERuDeF) recently launched the “participatory mapping “, a model of conservation wherein communities adjacent to forest areas take active part in the management of their forest resources. The model is also instrumental in the DRYAD project, which is geared towards promoting the development of local businesses from the extraction of Non-Timber Forest Products (NTFPs) from the community forests.

The participative approach engages villagers in the mapping of community forests with the help of a facilitator. The mapping process involves ground mapping, the collection of data, processing and the establishment of a concise map. At the level of the ground mapping, the villagers draw the space of their community forest on the ground by indicating the position of all elements including roads, rivers, non-timber forest products (NTFP) among others. Thereafter, they transfer the map got on the ground to the spreadsheet with all the details. 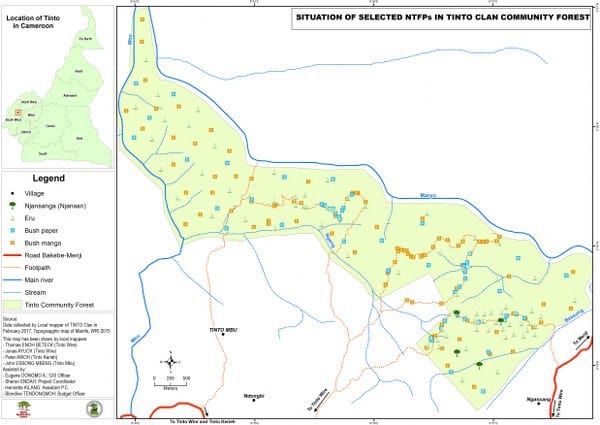 At the level of data collection, the villagers go to the forest for the acquisition of data using different tools that facilitate the collection of the data like GPS smartphones, and navigation GPS among others. Those who go to the forest have been trained beforehand on the manipulation of the tools of data collection, they are called the local cartographers. The data collected are given to the facilitator who processes them using the innovative technologies, produce the soft copy of the map that is validated by the entire community.

It was within this framework that the GIS specialist of the Environment and Rural Development Foundation (ERuDeF), Mr Dogmo Eugne, carried out Maps production, based on identification of forest resources of Tinto in the Upper Bayang Subdivision, Akwen and Agborkem in the Eyumojock Subdivision all in Manyu Division of Southwest Cameroon. Five resources, Bush mango (Irvingiagabonesis), Eru (Gnetumafricana), Bush pepper (Piper nigrum), timbers and Njansang ( Ricinodendronhendelotti), were selected to represent in the map.

In each community, at least three (03) local cartographers were trained on maps productionwith emphasis on the production of the ground mapping.