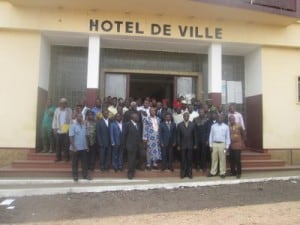 Chiefs and other stakeholders of communities adjacent to Mount Muanenguba, have pledged total support for the creation of the proposed Mount Muanenguba Integral and Ecological Reserve. They took the resolution, Friday March 10, 2017 in Nkongssamba, Moungo Division, Littoral Cameroon, during a workshop to introduce and engage key actors in conservation activities that will soon go operational within Mount Muanenguba.

According to the Chiefs, creating an Integral and Ecological Reserve at Mount Muanenguba will positively affect the people living adjacent to this biodiversity hotspot.

“From all indications the project will be beneficial to the local population if realised. We are ready to work with all facilitators to ensure the sustainability of the project,” chief Ekwennongene Alexis from Moeba village said.

They recognised the adverse effects of human activities on this proposed protected area.

“Activities of our fellow villagers have greatly affected the biodiversity of the mountain. Most of them are farmers and hunters, they encroach into the forest and carryout mass destruction. This project will not only bring our communities to the lamplight, it will also conserve the flora and fauna of the area,” another chief said.

Speaking during the workshop, the Senior Divisional Officer (SDO) for Moungo, Littoral of Cameroon, Kevin Etengeneng Oben, advised the chiefs and elites present to strengthen collaboration with the government and conservation Non-Governmental Organisations in protecting the rich biodiversity of the emblematic Mount Muanenguba. He urged the people’s representatives to sensitise the communities on government’s plans and the need for general participation for effective execution.

“Our country is highly blessed with biodiversity, we talk about plants and animals species. Mount Muanenguba prides itself with rich animal and plant species, found nowhere else in the world. For example, 270 bird species are found on that mountain, and of the number, 44 are found nowhere in the world. So that alone is enough reason for us to jealously protect our heritage. With that, I call on the main stakeholders to collaborate with government and the NGOs in making the dream of transforming the mountain into an integral ecological reserve. That alone, will be a great thing for the people and the country as a whole,” the SDO said.

Mount Muanenguba which cuts across the Southwest and Littoral regions of Cameroon is said to have a heterogeneous Ecosystem, harbouring 1000 species of amphibians, 89 species of reptiles and 270 bird species amongst which 60% of them are endemic. The mountain with height of 2411 meters above sea level, suffers chronic threats from communities living adjacent to the mountain. Habitat degradation, which involves conversion of natural land for agricultural land through shifting cultivation, destruction of trees for commercial purposes, overgrazing and trespassing of cattle in streams and water ponds, collection of amphibian and reptile species, amongst others, are the main threats rocking the mountain.

Faced with all of these challenges, Cameroon’s leading conservation NGO, the Environment and Rural Development Foundation (ERuDeF), joined forces with the Cameroon Herpetology-Conservation Biology Foundation (CAMHERP-CBF) to restore the degraded landscape of this mountain.

According to Chief Executive Officer (CEO) of CAMHERP-CBF, Dr Nono Gonwouo, the creation of the Integral and Ecological Reserve would not only conserve this rich biodiversity and ecosystem, but will equally protect and preserve their cultural heritage found on the mountain. To him, if the project is effectively realised, the mountain will serve as a touristic site, hence, creating employment opportunities for the local communities. The adjacent population would also benefit from alternative sources of livelihood to distract them from activities that deplete the forest.

For his part, the President and CEO of ERuDeF, Louis Nkembi, said ERuDeF will act as the field technician by providing its expertise in protected area creation and development. On the other hand, CAMHERP-CBF would bring in its experience and research accrued from past activities carried out on amphibians and other reptiles. He assured the population the project will effectively be executed, with the firm participation of the communities. Responding to worries from participants on fears of leap start and paralysing end with little or no results attained, the ERuDeF boss underscored the fact that the project will be be executed with the local population benefiting from its fallouts.

A technical working team was put in place comprising of ERuDeF and CAMHERP- CBF staff with facilitation from the Regional Delegation of Forestry and Wildlife of Littoral. The team will follow up the steps for the creation of Mount Muanenguba Integral and Ecological Reserve and also report its activities to all stakeholders involved in this project quarterly. It will also sensitise the community on the creation, and identify priority needs of the population that will eventually bring income from alternative sources of livelihood. Preceding the meeting, a socioeconomic survey as well as village census was carried out.

The workshop was graced with the participation of traditional and administrative authorities, elites, and the two concerned NGOs. The project is expected to see the light of day in the next three years.