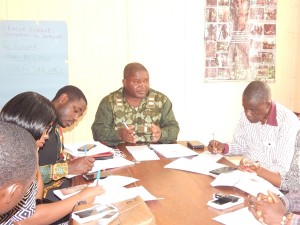 [/one_third]“No private individual or organisation has the right to own any reserve in Cameroon except planted forests. Mak-Betchou, like all other protected areas in Cameroon, once created will be owned by the state. Its creation is totally led and managed by MINFOF with technical and logistical support from the ERuDeF. So, Mak-Betchou is Government’s estate and not ERuDeF’s private reserve,” said the President and Chief Executive Officer (CEO) of the Environment and Rural Development Foundation (ERuDeF), Louis Nkembi, in a Press Conference organised recently at the Organisation’s Head Office in Buea.

The ERuDeF boss divulged that ERuDeF’s role in supporting the Government to create and manage some protected areas in Cameroon is not in any way aimed at “taking away the forest” from the forest adjacent communities or depriving them of their God-given source of living.

“ERuDeF’s role is to assist communities to ensure the sustainable management of biodiversity over the next generations. We are out to support the conservation of endangered biodiversity species and the vital ecological functions that this area embodies. Given that the proposed protected area is found at the mountain slope, its conservation will preserve the mountain slope, which is paramount given continuous landslides in the area,” Mr. Nkembi explained.

He underscored the fact that the creation of the Mak-Betchou Wildlife Sanctuary does not mean forbidding surrounding villages from harvesting resources from this site for local consumption, except endangered biodiversity species and ecosystem destruction.

“It means resources will be harvested sustainably. It is for this reason that the area is being proposed as a wildlife sanctuary, and not a national park where the harvesting of forest resources is not allowed,” he added.

Apart from opening doors to international and government investments, Mr. Nkembi opined that the gazetting of this site will be a bold step towards transforming Mak-Betchou into a veritable touristic destination in Cameroon. Besides conserving biodiversity species, he said the future Mak-Betchou Wildlife Sanctuary and the nearby Tofala Hill Wildlife Sanctuary are currently being ear-marked as the future economic hubs of the Lebialem Division. This according to him, will be of great interest to the entire communities and Cameroon as whole and “not a few self-seeking individuals who want to grab the remaining land in the Mak-Betchou forest area for selfish ends”.

The ERuDeF President/CEO acknowledge receipt of petitions against the creation of this site particularly coming from the elite, the chiefs and some farmers in the Lebang Fondom. He attributed these petitions to “wrong rumours propagated by a few misguided individuals” stating that a meeting has however be scheduled to address the petitions.

The Proposed Mak-Betchou Wildlife Sanctuary is an over 6000 hectares forest area located in Fontem Subdivision, Lebialem Division Southwest Cameroon, between the longitudes 586000m and 596000 m and 598000m and 606000m cutting across three Fondoms; Lebang, Essoh-Attah and Njoagwi and adjacent to about 15 communities. It is host to over 300 Nigeria Cameroon chimpanzees (one of the biggest chimpanzees’ density in Western Cameroon), over 100 forest elephants (the most northern range of African forest elephants within the Southwest Region of Cameroon), Drills, Cross River gorillas, bush baby, Blue duiker, Red River hog, red eared monkey and Mona monkey amongst others. The area is also home to some unknown plant species as well as globally threatened bird’s species.

A to Z of Proposed Mak-Betchou Wildlife Sanctuary Creation

In a bid to conserve and ensure the sustainable management of natural resources in this area, ERuDeF in 2007 launched research and conservation work in this forest area known then as the Mone Forest Reserve & Mbin Mak forest. This received a staunch resistance from the locals and elites who saw it as a move to “take their forest away from them” and depriving them of their God-given source of living. 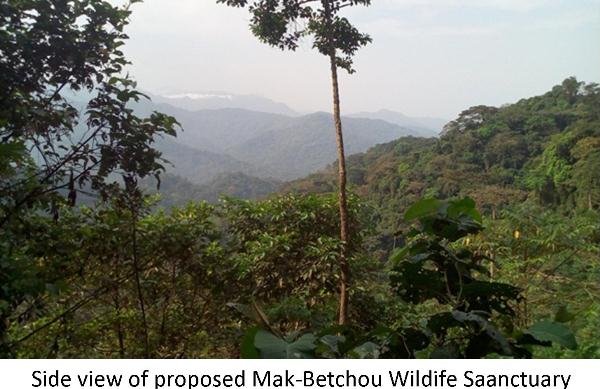 [/one_half]Through continuous survey, sensitization/education, livelihood support and economic development projects in the forest area, ERuDeF gradually changed the minds of most of the local communities’ in favour of conservation. With available data and the urgent need to save this biodiversity hotspot from total destruction, this conservation non-profit organisation in collaboration with divisional and regional officials of the Ministry of Forestry and Wildlife (MINFOF) held the regional classification meeting which culminated in the submission of a technical note in 2014 to the Minister of Forestry and Wildlife citing the necessity for creating a sanctuary in Mak-Betchou.

Even at this level, elites and traditional rulers still had descending feelings over the gazetting of PMBWS complicating the gazetting process. In August 20, 2015, the former Southwest Regional Delegate MINFOF, Mr. Samuel Ebai Eben, at behest of ERuDeF, convened a meeting, bringing together traditional rulers from communities adjacent to the proposed wildlife sanctuary, ERuDeF technical staff and MINFOF officials, to elicit a concrete consensus that will justify and facilitate the process of creating the Proposed Mak-Betchou Wildlife Sanctuary.

This meeting harvested the endorsement of all traditional rulers including those who had hitherto been resistant to the gazetting strive.

With all stake holders now singing in one voice, one of the remaining factors that was to impede the gazetting of Mak-Betchou was the unavailability of funding. In 2016, ERuDeF secured a 3-year funding from Rainforest Trust-USA. In January 2017, Cameroon Government through the Ministry of Forestry and Wildlife (MINFOF), officially declared her intention to move the proposed Mak-Betchou Wildlife Sanctuary in the Lebialem Division, Southwest Cameroon, into a protected area via the issuing of a Public Notice

The Public notice informed adjacent communities to the proposed protected area, as well as other stakeholders of the Government’s plans to transform this biodiversity hotspot hitherto used customary by the local people into a permanent forest estate. This according to the Notice, is to ensure the conservation and appropriate management of the richness and critical biodiversity of this area by the state and other partners.

Following the issuing of the Public Notice, ERuDeF last April 2017, embarked on a village-to-village sensitisation to adjacent villages to this proposed protected area including Njoagwi, Essoh-Attah, and Lebang Fondoms. The excitement, steam, and message were the same as inhabitants of the Fondoms adjacent to the proposed Mak-Betchou Wildlife Sanctuary massively mobilised themselves behind government for the classification of their forest into a protected area. This effervescence culminated in total support of the project by the inhabitants of each of the Fondoms, manifested through the various resolutions. The chiefs indicated their acceptance for the classification of the proposed Mak-Betchou Wildlife sanctuary into a fully protected area to proceed, with the exception of the fon of Fontem.

The process leading to the creation of the protected area, is already at an advanced stage of completion. The Divisional Coordination Meeting will be proceeded with a letter to the Prime Minister and Head of Government of Cameroon, where the classification processes will be finalised.

The classification process of the proposed Mak-Betchou Wildlife Sanctuary is being facilitated by a Cameroon’s leading conservation non-profit Organisation, the Environment and Rural Development Foundation (ERuDeF)with support from Rainforest Trust with supervision from the Ministry of Forestry and Wildlife.