Brings 40 new community based farming groups on board 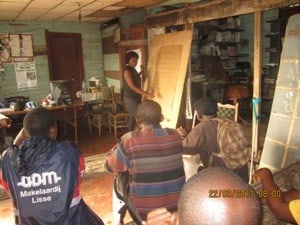 The practice of planting trees is slowly but surely gaining grounds in Cameroon. The benefits are also increasingly being felt. In the Southwest, West and Northwest, farmers have planted trees in their farms and improved on the quality of their soil and consequently witnessed an increase in their overall productivity as a farmer Njuenkeng Phillipe in Dschang, West Cameroon explains “Since I started planting Acacia and using the leaves as organic fertilizer, my maize yields have doubled. The soil which used to be very hard has become moist and the fertility has greatly increased”. Today, farmers who have incorporated tree planting have gone beyond just improving soil fertility to using trees as a defense mechanism for wind breaks, prevent soil erosion and above all help in the fight against climate change.

With such resounding success, the Cameroon Program of the US Charity Trees for the Future with its focal point the Environment and Rural Development Foundation (ERuDeF) decided to extend tree planting activities and agroforestry technologies to other farming groups in the Moungo Division of the Littoral Region and in the Kupe Manuenguba Division, of the South West Region of Cameroon. In Kupe Manuenguba Division precisely in Bangem Subdivision, three new groups were identified. The groups are Young Farmers CIG and NDA ASALE Young Farmers CIG in Ekambeng village and Struggling Hands CIG in Bangem. In the Moungo Division, the GROUPELMA in Poola and PROCOCELEN in Nkongsamba joined the league. In all, 40 new groups have been added to the over 200 farming groups in 2013. These groups have been sensitized and trained on tree nursery establishment. Over 33 tree nurseries have already been established and about 400.000 seeds of Acacia, Leucaena, Prunus and Jatropha were sowed together with farmers. Seeds were treated with both cool and warm water to allow easy germination. Over 3.000.000 seeds of different species were distributed to 40 farming groups making up over 390 farmers.

During sensitization meetings, the farmers showed great enthusiasm about the entire program and expressed their willingness to practice tree planting and see what it brings. Farmers belonging to PROCOCELEN (farming group) in Nkongsamba said they are aware of the negative effects of fertilizer ” it damages the soil and poisons the food we eat, but what could we do given that it is the only way to increase output from the farm” a farmer lamented. A Peace Corps Volunteer Carty, attending the workshop equally made the farmers understand that, agroforestry is for the future while using chemical fertilizer is for the present, but has many effects on humans. She added that, farmers should learn to be part of change and thus fight to make a change for a better future especially as our environment is concerned.