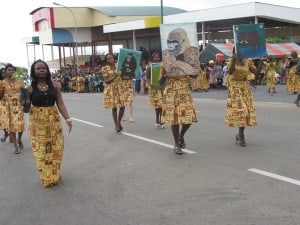 The women of the Environment and Rural Development Foundation (ERuDeF) on March 8, 2014 joined their counterparts world over to commemorate the 2014 edition of the International Women’s Day. The women used the day to raise awareness on biodiversity conservation to thousands of onlookers in Buea, SW Cameroon during the march past through banners, flyers and posters carrying messages and pictures on the need to conserve threatened species and protect fragile environments.

In Cameroon, just like in other parts of the world, women called upon on this day to reflect on how they contribute to various aspects of life especially areas which have hitherto been branded as a man’s world. It is in line with this that the women of ERuDeF put their voices and steps to march for the environment and let the world understand that women are true custodians of the environment and their role in its protection is indispensable. Earlier on, one of theirs, Asa’a Lemawah in the company of other women had exhibited their dexterity in riding motorbikes to usher in the Governor of the Southwest Region into the Grand Stand. The rest of the women folk at ERuDeF then marched past with pictures of the different species they clamour to protect including the Cross River Gorilla, the Cameroon Nigeria Chimpanzee, Elephants and other wildlife species.

The women of ERuDeF equally marched with tree seedlings calling on the world to plant a tree and contribute in the fight against global warming, food insecurity and desertification. Their march pass was equally a way of appreciating all the women who have worked hard in promoting the conservation of nature and the environment. Speaking after the march pass, one of the staff, Regina Leke said “I feel proud having taken part in this march pass. What is very essentially is that we want to use opportunities like this to sensitize people on conserving certain key endangered species of our country and also to make women understand they have an indispensable role in protecting the environment”

The International Womens Day it would be recalled is traced back to March 19, 1911 when men and women rallied in support of women’s rights on that first International Women’s Day. History has it that this day was inspired by America’s National Women’s Day, February 28, 1909, declared by the Socialist Party of America and through the years, evolutions to the appellation and significance of the day has quite changed. Recently, it is common to hear one refer to women’s actions to be the result of the Beijing Conference on women but the Day of the woman has come a long way and it is not just a day of fun.