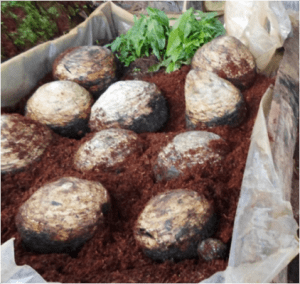 The over 20 plantain-corm-capacity nursery set up in April, 2015, according to Marie, was motivated by her desire to take development to her village and to inform her village folks about this new agricultural development technique on plantain and banana production, which has learned during her stay at the ERuDeF Institute.

“It was indeed my desire to start raising funds to help myself and other people in my community who gave me the extra push to initiate this project,” said Ndutu.

She added that setting up the nursery is a way to prove to her lecturers, the ERuDeF Institute administrative team and her mentor, Joram Shu of the Mambu Agro-complex in Bafut, that she has actually assimilated all that they have instilled in her.

Ndutu has constructed a nursery and set up a propagator with plantain corms inside, an exercise she said was very laborious.

“I used to sit and construct nurseries and establish plantations with my mouth very easily but the establishment of this nursery was very stressful and challenging that I think I am equipped for a bigger project,” said.

The Agro-forestry trainee said the primary purpose for her project is to sell the plantlets and raise funds to support her studies at the Institute.

She also hopes to expand the nursery, obtain a piece of land for her father and establish a small plantation using propagated plantlets.

Ndutu explained that if the project goes as planned, she will be able to generate some money that will lessen the financial weight that is being exerted on her parents.

She said the project will also help her generate funds to be able to meet the needs of the under-privileged, something she has always hoped to do.

Ndutu urges her mates at the ERuDeF Institute to use the least opportunity they have to put into practice what they have learnt in class because “time is very expensive and can’t be bought.”

Ndutu has trained an assistant in Diongo village to take care of her nursery while she is away.