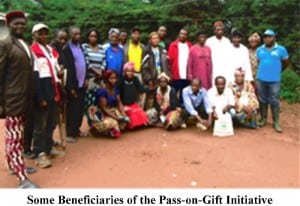 Ten new households in Fossungu, one of the adjacent villages to the Tofala Hill Wildlife Sanctuary, have benefited from the Environment and Rural Development Foundation (ERuDeF)’s Pass-on-gifts Initiative.

These households received over 37 piglets and 10 mother pigs during a Pass-on-gift Ceremony organized, June 7, 2016 by the Fossungu unit of the Tofala Alou Cooperative Society.

The Pass-on-gifts Initiative is part of ERuDeF’s Livelihood and Economic Development Programme instituted in 2014 to ensure long term livelihood support in Fossungu. This was also to reduce human pressure on the Tofala Hill Wildlife Sanctuary host to the critically endangered Cross River Gorilla and Nigeria-Cameroon Chimpanzee amongst others.

Through this initiative, ERuDeF introduced apiculture, and livestock farming to adjacent villages to Tofala. Training and start-up capital was also provided for the production of laundry soap, bathing soap, medicated soap and detergents. The organization also donated 10 piglets to some selected 10 households in each of the adjacent communities to Tofala with beneficiaries schooled on the basics of piggery management.

In order to ensure the long term sustainability of the projects, the organization introduced the ‘Pass-on-gifts’ Initiative such that each beneficiary had as obligation to pass-on what they benefited after two years to another set of beneficiaries. This meant that each household will rear these piglets and after two years, give back the mother pigs and provide one piglet each to be passed on to the next set of beneficiaries.

Two years after, the number of beneficiaries has doubled from 10 to 20. Community members testified that the livelihood support has greatly impacted their lives.

One of the former beneficiaries, Mr. Ndunyi Peter, who is also the President of the Fossungu Cooperative, said the livelihood support has been of great help to him and his household.

“This initiative has not only given me employment, it has also been a source of income generation. Proceeds from sales of piglets have helped me sponsor children in school as well as meet the needs of my household” he testified.

Mr. Ndunyi, just like other former beneficiary at the Pass-on-gift ceremony, promised to work harder to sustain his piggeries so that by 2020, he can boast of a piggery of over 1,000 pigs. This, according to him, would be the only way to show appreciation to ERuDeF and her partners.

The President of the Fossungu Cooperative cautioned his cooperative members and pass-on-gift beneficiaries to take the initiative seriously and promised to follow up all beneficiaries against any default.

The new beneficiaries on their part, promised to work harder and make optimum use of available resources and opportunities so that they can pass-on what they have received to the next beneficiary in just one year and not two years as stipulated.