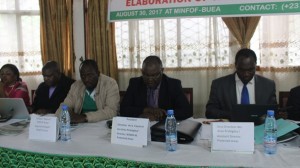 [/one_third]The Sub Director in charge of Protected Areas Management (SDAP) at the Ministry of Forestry and Wildlife (MINFOF), Njiang Antoine, has endorsed the Environment and Rural Development Foundation (ERuDeF) as Cameroon’s leading Biodiversity conservation non-profit Organisation. He says ERuDeF front-runs development and management of protected areas in the country.

Speaking during a workshop to establish a roadmap for the elaboration of the management plan of the Tofala Hill Wildlife Sanctuary, the Protected Area Management Sub Director said ERuDeF remains the first National NGO to facilitate the development of a management plan for a protected area in Cameroon.

He posited that, if ERuDeF continues with this spirit, the Organisation will cement its position as the leading biodiversity conservation Organisation in Cameroon and Africa.

“We have over 200 protected areas in Cameroon, with some 13 Management Plans. The Government has been the only one facilitating the elaboration and validation process for the Management Plans. ERuDeF is the first NGO to get involved in the facilitation process. Hence, it is unarguable that the Organisation is the leader of biodiversity conservation in Cameroon,” said Njiang Antoine.

The Sub Director revealed that MINFOF has signed and approved a working agreement with ERuDeF. The Memorandum of Understanding (MoU), according to him, paves the way for more collaborating actions between MINFOF and ERuDeF.

Meanwhile ERuDeF has since 2010 been engaged in facilitating the creation of series of protected areas to protect isolated population of biodiversity species in the country.

One of ERuDeF’s memorable achievements in protected area development in Cameroon was recorded in 2014 with the creation of the Tofala Hill Wildlife Sanctuary (THWS).

THWS created in 2014, is safe haven to Cross River Gorillas, Chimpanzees, Drills, Preuss guenon and Bushman potto. It also harbours some 42 plant species in the IUCN Red List, 6 of which are endemic to this site, amphibians and 14 bird species.

The Organisation was also instrumental in the creation of the Kimbi-Fungom National Park in North West Cameroon, home to Nigeria Cameroon Chimpanzees.

With support from Rainforest Trust-USA, Tusk Trust, African Conservation Foundation (ACF) and other international partners, ERuDeF is leading a campaign that will culminate in the creation and management of three other protected areas in Cameroon. These are the proposed Mak-Betchou Wildlife Sanctuary, proposed Mount Muanenguba Integral Ecological Reserve and the proposed Mount Nlonako Amphibians Sanctuary. 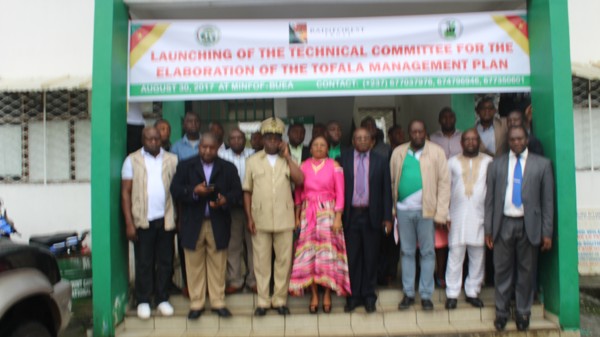 Meanwhile, the Organisation is also mobilising resources to ensure the conservation of endangered species like the Giant Frog of Mt. Nlonako in Littoral Region, the Drills and Bush Shrike of Mt. Kupe in South West region, as well as the Chimpanzees and Gorillas of the Deng Deng National Park in the East Region of Cameroon..

The creation of protected areas is ERuDeF’s approach to contributing to Cameroon’s conservation policy, which sets out to place at least 30% of the national territory under permanent protection.