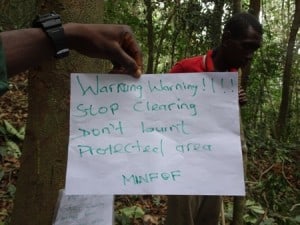 The Tofala Hill Wildlife Sanctuary is one of Cameroon’s newest protected area created in 2014 by a Prime Ministerial Decree for the conservation of some close to 40 Cross River Gorilla, over 150 Nigerian Cameroon Chimpanzees, unknown population Drills and other biodiversity species.

Though a bold step towards conserving this biodiversity hotspot and its emblematic biodiversity species, the protected area was still left at the mercy of some thirteen adjacent communities, who continue to hunt and sell wildlife species, also creating farms within the area in a bid to meet up with daily needs.

Haven successfully facilitated the creation of this protected area, the Environment and Rural Development Foundation (ERuDeF) could not let its dream of ensuring the long term conservation of endangered biodiversity species in the area, most especially the Cross River Gorilla, Nigeria Cameroon Chimpanzees and Drills amongst others to be watered down by unsustainable anthropogenic activities.

Aimed at ensuring the conservation and effective management of this biodiversity hotspot, ERuDeF and partner trained and equipped some nine government Eco-Guards and six community Eco-Guards with the necessary knowledge and tools like global positioning System (GPS), cyber trackers and camera traps, to crack down on deviant behaviours in and around the sanctuary.Few months after, the Conservator of the Tafala Hill Wildlife Sanctuary,Mr Thomas Njimin Amin, in an interview granted The Green Vision recently, testified that a lot has been achieved

“I think our presence and constant patrol of this area has scared away many poachers because poaching has drastically reduced. What remains a great challenge is the opening up of new farms most around the Egumbu flank of the forest. We actually find it difficult to carry out any legal action against the perpetrators because we too are not certain about the park boundary. So the speedier ERuDeF can facilitate the demarcation of the park border the easier our task will be” the Conservator recommended.

He added that their patrol has led to the discovery of a market in Egumbu that operates in the night and is known for the selling the cartridges to hunters mostly from Mamfe and Bamenda. The Tofala boss said he will be meeting the Divisional Officer of that area so that the market can either be dissolved or made to operate during the day.

In the area of research, ERuDeF’s team of biologists alongside some six trained local Eco-guards are carrying additional surveys in and around Tofala extending to areas like Egumbu, Bamumbu and Fossimondi, that have hitherto never been covered due to logistic reasons. Speaking to The Green Vision recently, ERuDeF’s Biologist, Gwendoline Angwa revealed that this additional survey has led to the discovery of a group of the Nigerian Cameroon Chimpanzee and signs of the Cross River Gorilla in Fossimondi and some monkey species in Bamumbu. She indicated that, the research has led to the recording of several signs of wildlife threats like gun shells and new farms with some up to one hectare amongst others.

Miss Angwa said the data collected has been imputed into a database which will be analyzed and published in due course. This, according to her will influence government policy towards the effective management of this protected area.

In order to effectively engage community members in the conservation of this protected area, Miss Angwa disclosed that ERuDeF has re-organised the Village Conservation Committee with members trained and implored to follow up and ensure that protected species are not hunted and new farms are not opened within the protected area. 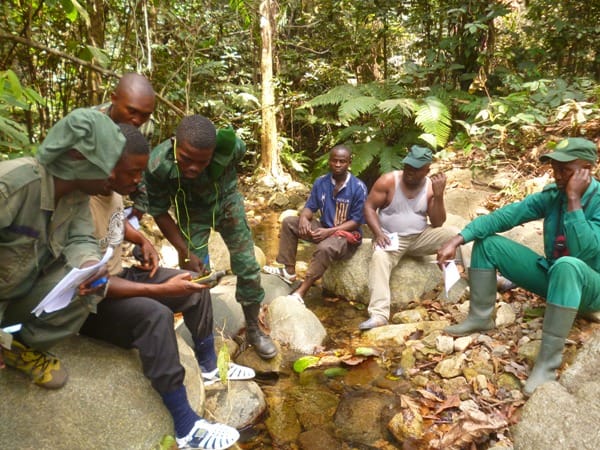 In a bid to promote ecotourism and research within this biodiversity hotspot, the Chief Operating Officer (COO) of ERuDeF, Ursula Nkeng, said feasibility studies are being carried out for the construction of an office based camp while contacts are already been made with engineers that will construct the camp. She added that activities geared towards demarkating the park boundaries have already begun. Meanwhile, the putting in place of a technical committee for the elaboration and validation of a Management Plan for the Tofala Hill Wildlife Sanctuary by the Ministry of Forestry and Wildlife (MINFOF), is being awaited. A request letter in this regard was transmitted to the Minister last April, 2017.

The COO stated that as soon as the technical committee is put in place by the Minister, a road map for the establishment of the management plan will be established while Sub-Divisional, Divisional and National validation meetings will be organized.

It’s therefore incumbent on the Minister of Forestry and Wildlife to speedy the putting in place of the task force to hasten up the establishment of the management plants greatly needed for the proper management of this outstanding biodiversity hotspot with globally threatened and important species.