ERuDeF, Progressing in Her Consolidation and Expansion Vision 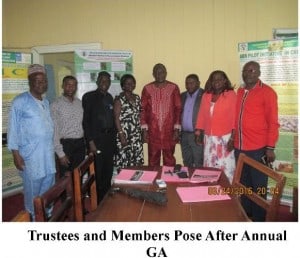 The President/CEO of the Environment and Rural Development Foundation (ERuDeF), Louis Nkembi, has said the organization is making remarkable strides in its consolidation and expansion vision.

He made this revelation while presenting his 2015 annual report to the ERuDeF Board of Trustees in their 17th Annual General Meeting, June 25, 2016 at the ERuDeF Head Office in Buea.

The meeting was aimed at assessing the successes and failures of the organization and board members as to map out better strategies of realizing the organization’s 2025 vision.

Louis Nkembi said ERuDeF is leaving its footprints and stamping its authority as a leading indigenous conservation organization in the country.

“Thanks to funding from some partners ERuDeF can boost of major conservation and development programmes in the Lebialem Highlands, Mt Cameroon and the East. It has also established Agroforestry programmes in the North West, South West, Littoral and the West” the ERuDeF boss disclosed.

Mr. Nkembi said through her reforestation and Agroforestry Programmes, some degraded landscapes have been restored as the communities were trained on agro-forestry techniques. Meanwhile, some communities have been economically empowered through the Gift Back to the Community Initiative.

The CEO however frowned at the “near zero participation rate of trustees and members in defining and shaping the growth of ERuDeF”.

“This lukewarm attitude coupled with government bureaucracy has only slowed down efforts in reaching anticipated targets and objectives” he added.

Mr. Nkembi said the organisation has launched the ERuDeF Junior Professional Programme at the ERuDeF Institute of Biodiversity through which stronger, emotionally strong and visionary persons could be groomed to help lead the organization.

He called on all trustees and members of ERuDeF to join hands to build and position the organization on the international scene. He also insisted that members must fit into the different programmes of the organization so as to contribute to their successes.

Opening the session, the Board Chair, Akemnda Eric Achankeng, congratulated Louis Nkembi on the enormous successes recorded by ERuDeF. He saluted the efforts of the management team in leading ERuDeF to the international scene.

The Board Chair formally announced the passing on to glory of one of their trustees, Joseph Atabong otherwise known as Ndi Nkemnjinya. Mr. Ndi Nkemnjinya held the position of Treasurer in ERuDeF before being transferred to the NW several years ago where he met his demise after a protracted illness.

On behalf of the Board of Trustees and all of ERuDeF Family, the Chair, extended his heartfelt sympathies to the bereaved family.

Mr. Akemnda Eric Achankeng implored new committed and competent members to join the organisation so that “together, efforts and expertise would help build a leading international NGO in the field of conservation”