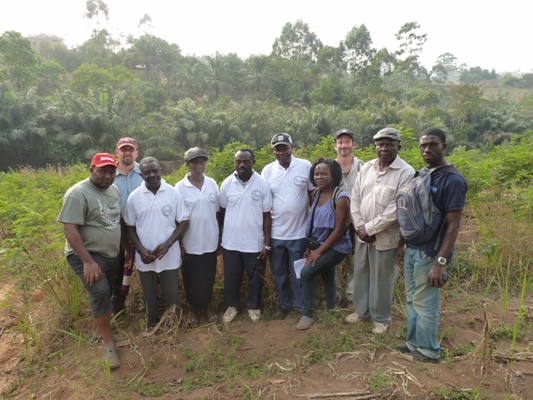 US based charity Trees for the Future has acclaimed the Cameroon Program, Trees Cameroon, for her consistent efforts in fighting food security among the rural masses in Cameroon through the introduction of agro forestry technologies. Mr. Benjamin Addlestone, Cameroon Programme Desk Manager in Trees for the Future’s USA office was speaking in Buea at a Dinner on the 14th of February, after a week-long visit to farms in the South West, West and North West Regions of Cameroon. Mr Addlestone explained that it was amazing for him to see how farmers in the different Regions are incorporating technologies to improve on their yields “The strength of this program was the enthusiasm that I saw with these farmers. I was impressed with the testimonies from farmers who confessed of having witnessed a steady increase in maize, beans, Irish potatoes, etc after using the leaves of plants like Acacia sp, Calliandra sp and Leucania sp as natural manure for the soil”.

The first stop he made was at Atulleh, Upper Lewoh, a small community in Lewoh Fondom (Lebialem Division). Here, he visited the Trees Cameroon’s Regional Agroforestry Research and Training Centre (RCATSP) where there is a seed bank of 100.000 trees currently under development. Trees Cameroon is developing this Centre to support its on-going tree planting and restoration programs in Cameroon. He further communed with over 20 farmers cultivating beans, sweet potatoes, beans and cocoyams. They explained how they have used agroforestry technologies to improve on the quality of the soil which hitherto was barren due to shifting cultivation. Mr. Addlestone proceeded to the West where he met with farmers belonging to the Menoua Agroforestry Network. These farmers explained that since 2009 the US charity, Trees for the Future introduced them to planting trees and using leaves as organic fertilizer, their story has never been the same . One of the farmers in Baleveng, Kenfack Phillippe, explained that due to over cultivation, the soil had become unproductive “but when I trimmed the leaves of Acacia and Caliandra which are natural nitrogen fixers and place on the ridges where I plant my maize and potatoes, I realized an improvement in the quality of the soil and my yields equally rose”. Mr. Kenfack explained that in his little farm of 0.85hectares, productivity has tripled hear him “Before, it was impossible to harvest corn amounting to 30.000FCFA, but in 2012, I had enough to eat and sold corn for more than 150.000FCFA. The father of nine explained that with this increase in yields, malnutrition has disappeared in his home and he has been able to support his children’s education. With his first son graduating this year from the University of Dschang, Mr. Kenfack has become a role model in Baleveng. In 2012, he gave out seeds of acacia to more than 20 farmers who are willing to adopt agro forestry. He has equally mobilized his natives to abandon the use of chemical fertilizer and take on natural manure through agro-forestry.

In the North West Region, Mr. Addlestone met with farmers who have used the technologies to improve yields and won prizes at national agricultural shows. Mr. Moshimbo Joseph, a farmer who adopted this method in 2008 explained that in 2011, his maize seeds were tested in the lab and he received an award for having the best maize seed in the whole of the North West Region. The leaves of the trees he explained are also an interesting feed for livestock such as pigs. Pigs grow healthier when fed with acacia leaves. The trees equally act as a defense mechanism for wind breaks in the farms. In his last word, Mr. Moshimbo thanked God for leading him to the US based charity, Trees for the Future and called on the organization and its Cameroon partner, the Environment and Rural Development Foundation (ERuDeF) to expand the programme to other regions for many more people to benefit from agro forestry technologies.

During the tour which lasted for one week, the Country Director for TREES Cameroon, Louis Nkembi congratulated the farmers for using trees to fight food insecurity. He however enjoined the groups to work towards autonomy through the strengthening of their respective Divisional Agro-forestry Farmers Networks.