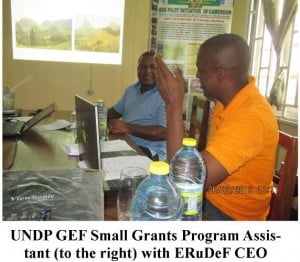 [/one_third]UNDP GEF Small Grants Program Assistant, Mr. Kamga, has expressed satisfaction at the level of professionalism, which the Environment and Rural Development Foundation (ERuDeF) has exercised in the valorisation of the ABS Echinops giganteus Project in Mount Bamboutos.

He was speaking during end of project evaluation meeting, which took place, June 23, 2016 at ERuDeF Head Office in Buea. The aim of this Working Session was to assess the level of achievement, identify gaps and reinforce the capacity of the implementing organization as to improve on the work done.

Speaking during the Working Session, the President/CEO of ERuDeF, Louis Nkembi welcomed the UNDP GEF SGP team thanking them for taking time off their busy schedule to visit his organization.

The ERuDeF boss said the visit will help reinforce the capacity of ERuDeF , identify the gaps and improve on them.

Mr. Kamga on his part said the meeting was necessary to assess the effectiveness of the project as well as ensure effective communication so that both partners can work together for the closure of the project.

In her presentation, the Echinops Project Coordinator Mrs. Lea Kenmene spelt out the project goal, objectives and achievements and lessons learned from the project.

Some key achievements of the project according to Mrs Lea Kenmene include a series of trainings to local institutions in Magha-Bamumbu and the validation and signing of the Mutually Agreed Terms (MAT) for the commercialization phase of the project.

Meanwhile 15 leaders of 15 local groups with over 225 persons received training on financial management and record keeping with participants testifying that such training will help them cut down on reckless spending.

Mrs Lea said over 5000 seedlings have been transplanted to restore the degraded Mount Bamboutos Landscape, and some 15 local groups drilled on agroforestry techniques and seedlings transplanting.

The Project Coordinator disclosed that besides restoring the degraded landscape of Mount Bamboutos, the newly planted agroforestry trees will increase the soil fertility of this area whose soil nutrient have been depleted by chemical fertilizers.

She said over 80% of activities earmarked for the project have been realised.

Mrs. Lea also revealed that through this project, some 8 micro project ideas have been identified together with the local community. These include the creation of a training centre for drop-outs and orphans, supply of equipment to hospitals and schools in Magha-Bamumbu, poultry farming project, and piggery project amongst others.

She regretted the fact that the publishing of the final report and case study, the production of project documentary and the inclusion of documents from the students were still pending. She however promised that these will be made available in the nearest future.

Reacting to her presentation, Mr. Kamga appreciated ERuDeF for such achievements “ERuDeF is not one of those ‘mushroom NGOs’ operating with disguised motives to maximize profit” he quipped.

The CEO/President of ERuDeF on his part, expressed gratitude to the GEF SGP partner for his official visit to ERuDeF. He hoped for more support beyond the Echinops giganteus valorization project.