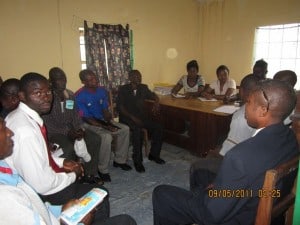 Farming groups across the 15 divisions where the Environment and Rural Development foundation (ERuDeF) is carrying out agroforestry activities have been called upon to reconstitute themselves and revitalise the Agroforestry Farmers Network created in 2010.

This call was made by Regional Coordinators of the Department of Agroforestry and Agricultural Development at ERuDeF during a one month tour across 72 farming groups in the Northwest, Southwest, West, and Littoral Regions in March 2017.

According to the Director of the Department of Agroforestry and Agricultural Development at ERuDeF, Madam Tionou Prudence, reinforcing these networks is one of ERuDeF’s priorities in 2017.

“ERuDeF in collaboration with Trees for the Future, in 2010, created some 15 Agroforestry Farmers’ Networks representing the 15 divisions where agroforestry activities are being carried out. It was rather unfortunate that most of these networks lose focus because financial support from ERuDeF was no longer coming. Kudos to the Fako Agroforestry Farmers Network which stood tall and continued to put in all efforts to make sure their network remains functional till date. For the other hibernated networks, we are looking forward to reinforcing them so all the benefits that usually come with networks, can be enjoyed by all farming groups,” Madam Tionou said.

She added that “a comprehensive article of association will be produced and distributed to all networks to ensure that they all have one goal and one interest.”

The building ofrigid Networks across all of ERuDeF’s area of agroforestry operation, comes on the heels of the Organisation’s intention to join the Agroforestry Alliance of Africa.