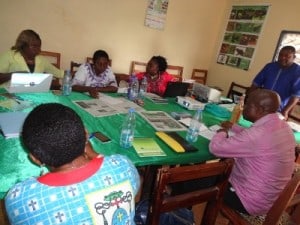 [/one_third]Board of Trustees (BoT) at the Environment and Rural Development Foundation (ERuDeF), have set FCFA 10 billion ($20 million) as the budget to run the organisation by 2035. They made this revelation, Saturday July 8, 2017, in an ordinary board meeting at the conference room of the ERuDeF Institute of Biodiversity and Non-profit studies.

The meeting was also aimed at adopting and approving the 2016/2017 report and budget. The President and CEO of ERuDeF, Louis Nkembi, indicated that FCFA 100 Billion would be used for the construction of an ultra-modern complex for ERuDeF hosting offices. It will also be used to erect a university with two faculties (Business and Biodiversity), 500 sitter capacity amphitheatre, departmental conference halls, virtual libraries, a research centre in Besali and a host of others.

This budget, according to the ERuDeF boss, will also be used for the construction the Organisation’s Western Regional office in Menji (to coordination activities in West, Northwest and part of Southwest Regions) and the Centre Regional office in Yaounde (to coordinate activities in the Centre and Adamawa Regions). He said the budget would equally see the recruitment of some 500 Cameroonians

The President and CEO disclosed that such a target is in line with the Organisation’s drive to consolidate its position as the leading conservation NGO in Central Africa as well as maintain its supremacy among NGOs in Africa. 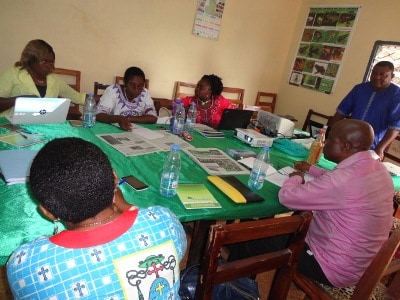 [/one_half]The President indicated ERuDeF would accomplish the budget at the stipulated time if all staff, management and Board of Trustees harness their efforts for the betterment of the organisation.

“The time for wait and see has passed. We need to redouble our efforts to meet up with all standards. If we have the right team and resources put together, we can go far beyond this vision,” Louis Nkembi said.

Schooling board members on the organisation’s progress and other key sites of interest, he cited the launching of ERuDeF UK and USA branches, the advancement of activities/work at the Tofala Hill Wildlife Sanctuary, proposed Mak Betchou Wildlife Sanctuary, and the proposed Mount Muanenguba Integral Ecological Reserve and others as key achievements.

Mr. Nkembi frowned at limited commitment and dedication exhibited by board members calling on them to become more committed so the Organisation’s aspirations can be met.

This reaction harvested varied feedbacks form Board Members at the meeting.

“I want to commend the numerous efforts of ERuDeF staff for the realisation of all these works. I think we as Board of Trustees have to be more committed to reach our expected goal; we need to be more committed and dedicated. We will leave no stone unturned at realizing our vision,” Dr. Zikeng Martina said.

The meeting ended with the admission of ERuDeF’s Chief Operations Officer, Ursula Nkeng, into the Organisation’s membership. Mrs. Nkeng promised to be more committed to the activities of the organisation and revive old member to be more active and interactive.

Meanwhile, Board Members agreed to elect other members to fill vacant positions including that of the Vice President who passed away early this year.