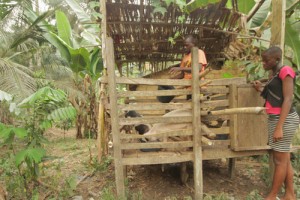 Mr Tamgamin Hanny, 41, says ERuDeF’s Livelihoods initiative, has greatly transformed his economic situation for good. Haven received two piglets from ERuDeF in 2015, the farmer said, his pig farm has grown in leaps and bounds, transforming him from an ordinary hunter to business magnet.

According to Pa Hanny, his commitment to his pig farm has paid off greatly. He attested to be able to feed his family and send his children to school, from the proceeds of his pig business.

“At first I used to find it difficult to complete my children’s school fees. Since I received 2 piglets from ERuDeF, things have never been the same. The piglets I received, grew so fast, and I am counting the fourth birth of the mother pig. From the first right up to the fourth time, the pig has given birth to a total of 34 piglets, enabling me to raise well over, FCFA 510,000. I have used the proceeds to renovate my house, provide feeding for my family, and sponsored my children through college,” said Tamgamin Hanny one of the beneficiary at Fossungu Village.

The pig farmer, not being selfish, has actively been contributing to the sustainability of ERuDeF’s livelihoods initiative, by donating at least a piglet, each time his pigs give birth. He has also been serving as a good example on how alternative sources of livelihoods work best, around protected areas.

The ERuDeF livelihoods initiative seeks to improve on the sustainable management of natural resources through human welfare development and reduction of human pressure on key biodiversity targets. In this light, some livelihoods support has been carried out in the villages around the Tofala Hill Wildlife Sanctuary. These activities include beehive donation, piglets’ donation and institutional development such as cooperatives and micro-finance development.

This donation was done by ERuDeF and with financial support from Man & Nature.