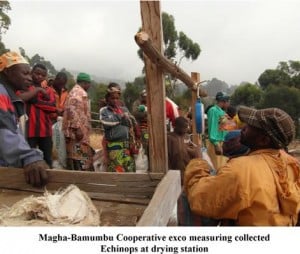 [/one_third]Known locally as “Ayilagwem”, the Echinops giganteus plant, hitherto used for the preparation of traditional dishes like achu & nkui, healing of some ailments and for recreation by little children, has become one of the sources of livelihood to most people in the Magha Bamumbu Community.

At the Echinops giganteus drying station where bags fresh roots of Echinops have been brought from for marketing, a Son of the Soil, Momanjong Denis, who is also ERuDeF field Technician coordinating the collection process said “a kilo gram of fresh Echinops roots sales at 400 francs CFA and over 3,000 kilograms of fresh roots are recorded for the first collection session with an a collection range of 10 to over 25 kgs per person. Thus, each person can boost of about 4000frs to 10000frs per collection depending on the quantity of Echinops.

Inhabitants of the Magha-Bamumbu community, who came to the drying stations with bags of fresh Echinops roots testified that proceeds from the sales of Echnops have been helpful to them and their families.

A Magha-Bamumbu indigene, Bandashi Bridget who just finished weighing 18 kg roots of fresh Echinops roots explained how helpful proceeds from previous Echinops roots sales have been helpful to her and her family.

“The previous ones that I have been selling here have been very helpful in supporting the education of children, buying household need and getting proper medical attention when sick,” Bandeshi said. She further disclosed that the sale of Echinops roots is the fastest means of income generation compared to other sources of livelihood because the collection is done in the wild and they do not need any extra efforts before getting the products to the drying station except the collection and washing of the roots.

“Before you harvest and sell potatoes in the market, you have to clear or burn, buy seeds, till the soil, plants the potatoes, apply manure, spray against pests, constantly check to remove wheats etc. All these take you over 5 months before you can think of harvesting; even after harvesting transportation to a reasonable market is a night mare due to our poor state of roads but for echinops just move to the wild, dig and sell” She explained

Another Magha-Bamumbu indigene, Tamukindo John, on his part said the Echinops plant was formerly used only during ‘born houses’, the treatment of diseases and the preparation of Achu Soap known in this area as ‘Milumpat’ until ERuDeF and some white men came that the plant could as well be used for perfume production.

“Today the plant is helping us in many ways-I have harvested these ones from the wild and brought to this drying station for weighing and payment” he said.

“Echinops is a wild plant. When we go for harvesting, we select those with balls or fruits because they are the mature ones. Once a mature Echinops has been seen, we use a cutlass to clear around the plant. After clearing, we open the area with a hoe and then a dig axe to dig out the roots. After digging, the Echinops is washed, and cut into 7cm as recommended by the perfume production enterprise to facilitate drying. It is then piled in bags and taking to the drying station for weighing where one kg is sold at 400 francs CFA. After weighing, it is sent to the drying station for cutting and drying, and then exportation to the V. Man Fils company in France for perfume production,” Tatachop and his wife narrated.

Regarding the sustainability of the Echinops plant, community members said they have been trained on the cultivation of the plant and have each opened up Echinops farms in this regard.

Echinopsgiganteus was located in Maha-Bamumbu, Lebialem Division-Southwest Cameroon in 2012 by a French company dealing with fragrance and flavors, V. Man Fils, as having the potential value for perfume production and is Cameroon’s pilot project base on the Access and Benefit Sharing (ABS) principle, which encourages the fair and equitable distribution of benefit arising from the exploitation of genetic resources and related traditional knowledge.