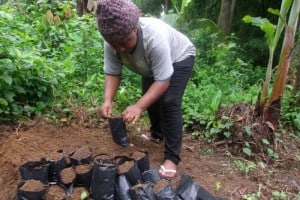 With the support of French Charity Man and Nature, the Environment and Rural Development Foundation (ERuDeF) has set up a 20.000 capacity Non-Timber Forest Products(NTFPs) community nursery in Nkong, one of the seven villages bordering the proposed Tofala Hill Wildlife Sanctuary. The nursery comprises of economically beneficial trees including bush mango, bitter kola, njangsang, country onion, bush pepper, bush plum amongst others. These economic trees will later on be distributed to all the villagers starting with those who farm in the buffer zones of the proposed sanctuary. The objective is to reduce the distance, time and energy that the villagers hitherto spent in collecting these NTFPs and consequently reduce the pressure on a forest so rich in wildlife including the critically endangered cross river gorilla and the Nigerian Cameroon Chimpanzees.

Non Timber Forest Products (NTFPs) it would be recalled are indispensable part of the livelihood strategy of communities living in and near forests. Forests contribute to all aspects of rural life: providing food, fodder, fuel, medicines, building materials, and materials for all sorts of household items, as well as many more intangible benefits such as cultural symbols and ritual artefacts.

Research has demonstrated that people only exploit resources from the forests when they cannot be found on nearby fallow lands or in their farms. It was from this perspective that ERuDeF came up with this idea to set up a community nursery which will be owned and managed by the people

Nkong which will provide one of the corridors for the sanctuary has also been provided with a 50 000 capacity agroforestry tree nursery in the community early this year. ERuDeF would train the farmers especially the women on how to incorporate these nitrogen fixing trees into their farms for soil health improvement and also increase farmers’ yields and prevent them from further converting forests into farmlands. It is expected that this will significantly improve the livelihood of the villagers especially the women.

Women in Sub-Saharan Africa have the highest labour force participation in the world, the vast majority of it working on farms. Yet their productivity remains low. Many studies have revealed that NTFPs can contribute significantly to the economic empowerment of women, and many more studies have asserted that commercialisation of NTFPs has a greater impact on women’s livelihoods and therefore any opportunity for increasing their involvement is very essential for the empowerment and sustainable development of rural communities. It is hoped this will be true for the women of Nkong.