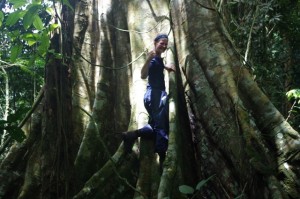 I am Anna Murphy from Scotland. The two-week volunteering experience with ERuDeF has indeed been full of surprises, all memorable, and one in particular absolutely magical!

I was warmly welcomed into Cameroon by brightly smiling Bertrand, whose gentlemanly nature I immediately appreciated as he demanded to carry my heavy backpack immediately bombarding me with information about ERuDeF, his passion was so energetic that I could not help but become even more enthused about the volunteering I had come to do.

Observing a goat being strapped to the top of the bus, much as if it were one of the cabbages it lay alongside, was not exactly something I had loved to see as we headed for the expedition proper in the Mak-Betcou area.

The next day that is after the long and challenging journey, I had to take part in the ERuDeF Conservation Education Programme in G. S Njentse-Andu. I was to face a classroom full of curious primary school students, and at the time this prospect daunted me far more than the thought of an arduous five hour trek I had to take subsequently into the Proposed Mak-Betchou Chimpanzee Sanctuary. However, after watching a competent ERuDeF member easily maintain their attention, I was determined to share my love for the apes too. By explaining my love for the apes and why I had come to help their protection, I was genuinely encouraged by the ease with which the children picked up new ideas, thus rapidly understanding why ERuDeF values conservation education so highly.

The following day, trusting in Ake’s faith of black magic to withhold the rain, we biked (and hiked when the ‘roads’ become impassable) to the coronation of the new Fon of Fontem. Suddenly the kingmakers from her stories were stamping and shouting right in front of me, barefooted, cloaked and exuding intimidating authority. I also learnt how to identify different styles of traditional Cameroonian dress, so I began to appreciate people’s outfits beyond the vibrant colours. Mistaken as a photo-journalist I was permitted to wander to the heart of the action, therefore appreciating the melodramatic grief of the widows of the previous Fon but gaining too beautiful views of the dancing horses in all their finery. On return to Menji (in the heavy rain) we continued the celebratory atmosphere as I managed to create a vague version of my mother’s go-to victoria sponge in belated celebration of the birthday of a fellow volunteer.

After an initial challenge of the next day, I relaxed into the tranquil atmosphere, enjoying the misty silence of the mountains and authentic beauty of the local houses. That evening the tranquility was broken by the talkative Chief Fondu of Andu as he excitedly gave us a tour of his palace, proudly pointing out the 7 separate kitchens (one for each of the previous chief’s wives) and lecturing us in considerable detail about the ceremonial uses of his many wooden masks and sculptures. But the pangolin and plantain stew will perhaps remain one of the most vivid of my memories: the fright of being shown the animal beforehand, adjusting to the idea of eating every single part of the animal, and the peculiar texture of the skin yet tenderness of the meat inside.

From the Fon’s palace, our next stop was the proposed Mak-Betchou Chimpanzee Sanctuary. While waiting for the porters to ready themselves, I enjoyed playing with the chief’s young children, encouraging them to draw gorillas and chimps, and explaining that they were not for eating. I hope the message got through. ERuDeF is certainly working hard to sensitize these traditionally hunter communities about the importance of the apes. Thaddeus, our field guide, had certainly come round, proudly chirpily explaining the economic benefits of the pigs and beehives ERuDeF had provided, saying ‘the chimps are our friends now.’

But the expedition to the forest was what I really came for, and it was phenomenal. The blue and purple butterflies dancing in and out of the shadows, the beauty of the trees whose trunks appear to extend into the canopy, and the intertwining vines and branches below, the methodical process of collecting data, knowing that each sign recorded will help persuade the government that Mak-Betchou is an area worth protecting, were so amazing. The excitement of a fresh elephant footprint in the mud; laughing out loud when Bedwin, our kind-hearted fun-loving ERuDeF Biologist, appeared into the campsite with an angry chameleon; when I went for a pee in the forest and was greeted by a spotty little frog staring right up at me; the hours of trekking, or indeed sitting and waiting for the rain to pass, are all treasured moments. The most special of these revealed itself by cheerful and raucous vocalizations on the last day, and I was blessed enough to gain a glimpse of chimp strolling down a branch and swinging away. My grin hardly dwindled the whole walk back to Andu. Next time, the most hidden treasure will certainly be the all-elusive, critically endangered Cross River Gorilla.