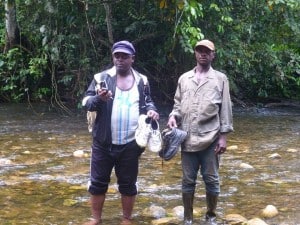 The proposed Mak-Betchou Chimpanzee Sanctuary has been mapped out by a team which composed of the Divisional Delegate of Forestry and Wildlife for Lebialem, Mboui Jacques, Chief of Forestry and Wildlife Post for Fontem, Ngnitchiba Gah Edrissou, SW Regional GIS officer in MINFOF Buea (Bakia Achakap), Regional Chief of Wildlife and Protected Areas (Nono Joseph), the Coordinator in charge of Protected Areas Development at the Environment and Rural Development Foundation (ERuDeF), Enokenwa Allen Tabi and some representatives of the community (Nkengafack Fidelis, Forbang Timothy, Leke Victor, Njingu James and Aminkeng Thaddeus Bekong). The activity took place between May 2 and 16 May, 2014.

The Global Positioning System (GPS) was used to record waypoints of some landmarks for example River “Betchou”, River “Mfe”, “Nyimbouzor” Mountain around the proposed protected area.

The mapping of a forest area it would be recalled is part of the legal step in the preparation of a Technical Note of information, which is the first phase in the classification of permanent forest in Cameroon.

Apart from the preparation of a Technical Note, other steps involved in the creation of a protected area include the publication of a Public Notice, sensitization of administrative authorities and local elites, sensitization of local populations and Divisional Classification Commission.

The Mak-betchou forest is found in the Lebialem Division, SW Cameroon. This forest area got its name from two rivers “Mak” and” Betchou”. The Mak-Betchou forest harbors a very large population of Nigeria-Cameroon chimpanzees (Pan troglodytes ellioti), African forest elephants (Loxodonta africana cyclotis), signs of the Cross River gorilla (Gorilla gorilla diehli), other large mammals and more than 288 bird species of which some are threatened and endemic.

After an in-depth research conducted by teams from ERuDeF and local MINFOF authorities and because of the large populations of chimpanzee and other wildlife species found in this area, the local MINFOF authorities in collaboration with ERuDeF decided to carve this area as a protected area in a bid to provide a safe haven for these mammals whose populations have reduced drastically over the last decade due to man’s unfriendly activities such as hunting and expansion of farmlands into the animals’ habitats.