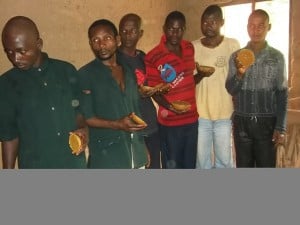 The Environment and Rural Development Foundation (ERuDeF) has trained twelve inhabitants of Folepi Village in the Lebialem Highlands in bee hunting. This was during a capacity building workshop that took place in the village on August 18, 2013. The workshop follows the donation of 30 piglets and 35 beehives to the population last July 28, 2013. The aim of the training workshop was therefore to ensure that the population has the right capacity to manage these livelihoods support initiatives.

The workshop saw the participation of 12 members from three Common Initiative Groups in charge of bee farming in the village notably, the AFALA Bee farmers CIG, AFAF bee farmers CIG, and Natural farmers CIG Folepi. During the workshop, the Researcher and Trainer, Dominique Folefac told the people that Folepi village in particular and the Tofala forest area in general has the highest potential for bee farming. This is because the basic raw materials including many all-year-round flowering plants, rocks, fruit trees, etc as well as the bees are largely available. The Bee Farmer and Researcher, Dominique Folefac revealed to the population that if taken seriously, bee keeping could be the main source of income for the population as the potential of the 35 bee hives donated to Folepi is estimated at some 3,150 liters of honey per year. To demonstrate the importance of bee faming in the area, Chief Njong, representing one of the CIGs noted that ” Bee farming has been helping me pay the school fees of my two children since 2010″ Apart from management skills gained, the farmers were also introduced to the use of local materials for the production of bee hives. With this progress, ERuDeF has stamped its mark for a joint conservation and development initiative in the Lebialem highlands. Bee farming if properly developed, could lead to sustainable management of natural resources in the village. The Fon of Folepi lauded the idea of a training workshop. He thanked the NGO, ERuDeF for the initiative and hoped for brighter days.

Just to note that this training is a follow up of the Memorandum of Understanding that was signed between the Ministry of Forestry and Wildlife and the population of Folepi. The aim of this MoU is to dissuade the people of Folepi from invading the forest in the form of hunting and conversion of forest into farmlands; The Folepi Village forms a significant portion of the proposed Tofala Hill Wildlife Sanctuary which is home to several globally protected species including the critically endangered Cross River Gorilla, Nigeria Cameroon Chimp and a host of other endemic and endangered flora and fauna.