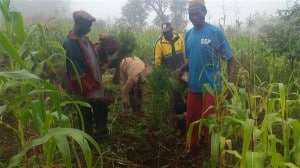 [/one_third]Farmers in some villages in Lebialem Division, Southwest Cameroon, have been trained to introduce Alley Cropping Technology into their farms for better yields. The training was organised June, 2017 by the Lebialem Agroforestry Coordinator at the Environment and Rural Development Foundation (ERuDeF), Ntungwa Elong, during a sensitisation tour organised in the villages. The villages included Ndungated, and Nwametaw.

According to the agroforestry expert, alley cropping has universally been chosen as the best form of agroforestry practice. He reiterated that the major design is such that, the rows run from east to west, following the path of the sun. He added that farmers should ensure that there is not too much shading among the rows.

“We use mostly Accacia and Leucaena agroforestry tree species in Alley cropping. The trees are planted in a double row in a triangular form, 30cm apart and the spacing between rows ranges from 4 – 6 m. That will enable an intensive system which will produce large quantities of wood and quickly revitalise warm soils with the massive amount of biomass,” NtungweElong said.

Besides alley cropping, the farmers were also trained on live fencing techniques. Farmers were advised to always introduce the technique at the boundaries of their farms. 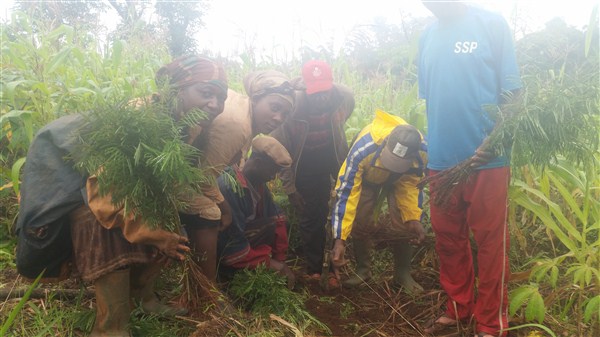 [/one_half]“Live fencing is an animal-proof barrier composed of trees and shrubs planted at close spacing around the perimeter of a farm or field,” Ntungwe Elong added.

After the classroom sessions, the farmers were taken to demonstration farms where the planting techniques of alley cropping and live fencing were established.

Agroforestry is a land use system that integrates trees, crops, people and animals on the same piece of land in order to get higher production, greater economic returns and more social benefits. In line with using agroforestry technologies to restore degraded landscape while ensuring environmental protection and improving the income of resourced-poor farmers in Cameroon, the Department of Agroforestry and Agricultural Development at ERuDeF in collaboration with Trees for the Future, went out to some 15 divisions in the Northwest, West, Southwest and Littoral Regions of Cameroon to carryout workshops on seedlings transplanting