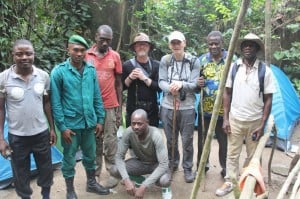 A state of the art research centre and an ecological lodge would soon be erected in Besali, a community adjacent to the Tofala Hill Wildlife Sanctuary. The United Kingdom branch of the Environment and Rural Development (ERuDeF-UK), disclosed their plans during a feasibility study carried out in the area, January 31 to February 3, 2017. According to the Chair of ERuDeF UK, John Daniels, the aim is to promote research and ecotourism in the area.

During this visit, the ERuDeF team held talks with Chiefs and inhabitants of some villages in Tofala including Besali and Bechati communities of the Tofala rain forest to enlighten them on the project and what they stand to benefit.

The Chiefs and village inhabitants welcomed the project with great joy and anticipation with the traditional ruler of Besali, Chief Ekwe Tayem Robert, offering a piece of land for the construction of the research centre.

“This Project is a great idea which I am sure will bring lots of benefits to my people as has always been the case. Reason why I didn’t hesitate to offer a piece of land to be used for the realization of the project” Chief Ekwe stated.

Apart from the employment and high exposure which the creation of this touristic site will bring to the community dwellers, support for education through scholarships and empowering the local women cannot be left out as this will go a long way to help alleviate poverty in the area and also reduce human pressure on the forest as alternative sources of income will be provided to the women.

After holding talks with the adjacent communities, the ERuDeF-UK and ERuDeF-Cameroon teams headed to the Tofala Hills Wildlife Sanctuary, where they spent two nights carrying out feasibility studies for the establishment of an ecological lodge in the forest.

This visit also gave the team an opportunity to appreciate the touristic potential of this biodiversity hotspot.

“A place like Tofala Hill Wildlife Sanctuary is indeed an attractive site to behold. Its rich biodiversity, beautiful landscape and untamed forest vegetation has been my point of interest in the area since from my last visit in 2013 and now. …. The place is worth visiting over and over again reason why I think a research centre and an eco-lodge is a paramount need in the area” ERuDeF UK branch committee Chair disclosed

In the same light, ERuDeF-UK Committee Member, Mr Paul Spillet, who doubles as a Photo Journalist, expressed great satisfaction after spending two nights in the forest.

“Though my first time in Africa, it feels like home to me. Being in Tofala was a completely great and enjoyable experience and I must say coming to Tofala has undoubtedly heightened my love for nature and am so glad I visited,” he remarked.

For his part, the President and Chief Executive Officer of ERuDeF, Louis Nkembi, said the presence of these Eco touristic infrastructures will greatly boost tourism in the area. He urged the population of Besali to cease the opportunity and make great strides in their fief.

The Tofala Hill Wildlife Sanctuary is an irresistible touristic site with special features including waterfalls like “Tem-tem waterfall”, streams and endemic plants, insects, butterflies and animal species. It is host to close to 30 critically endangered and endemic Cross River gorilla, 900 bird species, over 100 plant species and over 150 endangered Nigeria Cameron Chimpanzee.

Besides its great touristic features the area is surrounded by hospitable communities.

However access to this ‘paradise’ remains a nightmare especially during the rainy season.