ERuDeF Unveils 2014 Agenda To The Media 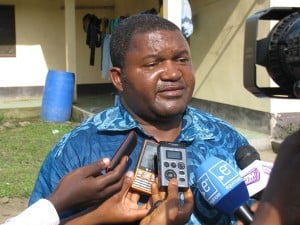 The Environment and Rural Development Foundation (ERuDeF) on March 29, in Buea, in the presence of some pressmen and women, alongside members of its Board of Trustees, unveiled her 2014 plan of action.

Addressing a team of media men and women at the Press Conference, the President/CEO of ERuDeF Louis Nkembi presented the route map of 2014 for his organization. According to the President the route map would focus on realizing the mission and objectives of ERuDeF and will form the basis for the development of a new strategic plan before the end of 2014.

“The success of our plan of action, centers on five cardinal principles of ERuDeF including; Biodiversity Management, Research, Protection of fragile environments, Education and Community Engagement” Louis Nkembi said. The President explained that through its Biodiversity Management Program, ERuDeF will be assisting the government of Cameroon to create and manage a certain number of protected areas. “Alongside the following up of the documents for the final classification of the proposed Tofala Hill Wildlife Sanctuary, ERuDeF will also be supporting the Ministry of Forestry and Wildlife(MINFOF) to relaunch the final classification of the Mt Kupe Integral ecological Reserve and the consolidation of the important biological corridors within the proposed Bakossi-BayangMbo-Tofala Technical Operational Unit” Louis Nkembi said.

The ERuDeF Boss explained that within the Biodiversity Research Program, the organisation will continue to support the biological monitoring of the key species of fauna and flora including elephants, cross Rivers Gorillas, Nigeria-Cameroon chimpanzees, Red data plant species, Drills etc. The NW Chimpanzee conservation Research Project will also be launched to support the NW wide chimpanzee conservation efforts.

With regards to protecting fragile environments, ERuDeF as part of its 2014 agenda will focus on restoring the productivity of degraded and fragile ecological system in Cameroon. To this end, ERuDeF anticipates to plant over 50.000 trees. ERuDeF’s current area of intervention as far as restoring degraded landscapes include the Mt Cameroon area, the Mt Bamboutos ecosystem and Lebialem Highlands.

In the area of education, ERuDeF has laid down four key focal points in which they will continue to improve on the quality of education delivery in rural schools by introducing competence based environmental education courses, Environmental Education Development Fund, operationising the Environmental Education Associations. Another education priority of the organization will be the training and capacity building of young leaders in environment, through the ERuDeF Institute of Biodiversity and Non-profit Studies in Buea. Through its PR and Corporate Partnership Program, ERuDeF looks forward to engage increasing number of public, civil society and private sectors partners in its efforts to fight biodiversity and environmental degradation.

Finally, ERuDeF looks forward in its 2014 plan of action, to increase the local, national and international community awareness on Cameroon’s environmental issues through the monthly production of its Green Vision Newspaper.

Through its Community Engagement Programme, ERuDeF looks forward to the launching of its Sliver Back Company (a social enterprise approach designed by ERuDeF to support the economic development of local communities). The Community Engagement Program will also see the organization Give back to the less privileged through the Give Back to the Community Initiative. The President used the Press Conference to officially launch the ERuDeF’s Give Back to the Community Initiative, which aims to support some of the major social problems affecting the local people in the areas that ERuDeF operates, including hunger and social deprivation.

By December 2014, ERuDeF hopes to develop a new five year community embracing strategic plan which will run from 2015-2020, adopted by its Board of Trustees, to complete the restructuration process on-going at ERuDeF.

Also speaking at the Press Conference, the Public Relations and Corporate Partnerships Officer, Regina Leke said ERuDeF as an organization has as vision, to conserve and protect fragile environments through education, research, training and community engagement. She also added that for the past 14 years, ERuDeF as an organization, has stayed true to its vision by developing and strategizing on how to better address relevant rural and environmental issues.

She further revealed that part of their 2014 agenda was to build a strong relationship between her organization and the media in a bid to raise awareness on biodiversity conservation and also make the public understand what the organization does. Regina Leke also cautioned that in as much as ERuDeF was keen to developing a solid partnership with the media world, to better meet the objectives of the organization, information regarding ERuDeF to be published by the Media Partners should be sent to the Communication Department, for review. This was to ensure that whatever information published remains consistent with the vision of the organization.

ERuDeF will be accompanied in its 2014 agenda by some of its partners amongst which are the French Fund for Global Environment, Tusk Trust, Man and Nature, Mane Foundation, the French Embassy in Cameroon, Fauna and Flora International, Project Plus Action, Africa Conservation Foundation, My Tree Company, Lea Nature and Trees for the Future. ERuDeF also enjoys the support of the Ministry of Forestry and Wildlife, Ministry of Environment, Protection of Nature and Sustainable Development and the Ministry of Agriculture and Rural Development, at the national level. The President used the opportunity to appreciate the collaboration it receives from the national civil society organizations including Breaking Ground.