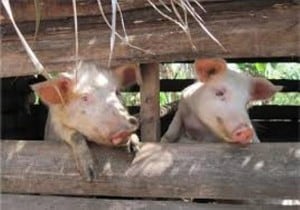 The alternative livelihood support to villages around the proposed Mak-Betchou area in the Lebialem Highlands has been scaling up in the last years. This finding was made during a recent visit by the President/CEO of ERuDeF Louis Nkembi accompanied by a Representative from the French Fund for Global Environment (FFEM), Silvia Ritossa.

ERuDeF with the support of the FFEM and other partners began a series of livelihood support around the proposed Mak-Betchou Chimpanzee Sanctuary as far back as 2012. ERuDeF donated piglets and beehives to some Common Initiative Groups(CIGs) and individuals. The donation was done such that the piglets would be revolving upon delivery; that is to say once a beneficiary’s pig puts to birth, the fraction of the young piglets equivalent to what the beneficiary received would be given to another member of the CIG and it goes on through a system is known as ‘Pass-on-the gift’

In this special visit with FFEM’s Silvia Ritossa paid to the beneficiaries more than one year since they received the piglets, it was realized that the donated piglets have started reproducing and more and more people have benefitted through the revolving system. One of the beneficiaries, Nkemleke George of Andu community has seen his pig delivered 6 piglets whose distribution to the rest of the community is underway. The pigs of Robert Nkem-Amin are currently pregnant with delivery date fast approaching and the same tradition of sharing would be respected following the engagement that the community entered with ERuDeF. Another beneficiary Mr. Thadeous has already shared his young eight piglets with his community members.

It should be recalled that a total of 11 piglets were donated to this small community of Andu around the proposed Mak-Betchou Chimpanzee Sanctuary. With average birth of 7 piglets per donated pig to the community, it could be concluded that by the end of 2014, out of the 11 piglets donated, the community will have about 88 pigs and piglets circulating in the community and benefitting a larger number of the population, excluding the chances of birth of newly delivered piglets. Over the next five years, the impact of this project is expected to have spread across the communities, thereby improving the livelihood of the villagers.

In an interview with a Native and Beneficiary, Mr. Nkemleke, he lauded the donation as a livelihood alternative to forest conservation and promised long term collaboration with the project, while calling on his fellow villagers to jealously protect the forest.

In 2014, 70 more piglets and 70 bee hives would be given to the communities. Earlier on in 2013, ERuDeF successfully launched a semi-giant palm oil pressing mill in Essoh-attah and the first pilot industrial processing mill was launched in March 2014. This oil mill is expected to produce over 2 tons of improved palm oil per day. Many other livelihoods and economic development initiatives are being anticipated for Mak-Betchou villages.

It is important to note here that the donation of piglets and bee hives to these community is a strategy of ERuDeF and her partners to divert the attention of the villagers from destroying the proposed Mak-Betchou Chimpanzee Sanctuary, thus providing a safe haven for some globally protected species living in this forest including the Nigeria-Cameroon Chimpanzee, Forest Elephants and the critically endangered Cross River Gorillas.