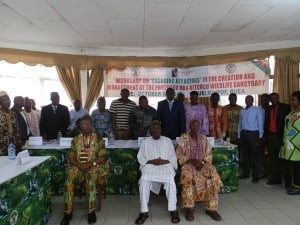 Traditional rulers and elites in the Lebialem Division, Southwest Cameroon, have added their voices to national and international ‘calls’ on the Cameroon Government to precipitate the gazetting process of the proposed Mak-Betchou Wildlife Sanctuary.

They drafted a petition for the Ministry of Forestry and Wildlife (MINFOF) to reiterate their stand at the end of a meeting for the engagement of key actors in the creation and management of the proposed Mak-Betchou Wildlife Sanctuary, which took place last Saturday October 8, 2016 at MINFOF, Buea.

According to Fon Fotabong V.L. of Njoagwi and Chief of Essoh-Attah, HRM Julius Forkwetta, the gazetting of this biodiversity hotspot will conserve the different wildlife species for future generation, induce more development and livelihood benefits to their communities.

The President/CEO of the Environment and Rural Development (ERuDeF), Louis Nkembi, on his part, said the gazetting of the Proposed Mak-Betchou Wildlife Sanctuary will transform the area into an enviable touristic hotspot in Cameroon and Africa.

“Some countries like South Africa, Zimbabwe, Kenya, etc. have tourism at the centre of their revenue potentials. The creation of the Mak-Betchou Wildlife Sanctuary will bring much economic benefits in terms of tourism in the areas adjacent to it,” Louis Nkembi reiterated.

He pointed out that in the wake of the creation of the protected area, many villagers will be employed for skilled, semi, and unskilled works in eminent cottage industries as well as benefit from international subventions from biodiversity conservation organisations and individuals.

“These international philanthropists will sponsor community development projects through the issuing of small and big grants,” Louis Nkembi added.

The ERuDeF boss presented the Community Conservation Social Enterprise Development (CoCoSED) Model, an initiative aimed at providing funding opportunities to local communities as a way of improving their livelihoods, scaling up development and diverting communities’ attention from the forest.

He indicated that the implementation of the model will provide business opportunities to both individuals and the entire community.

Another facilitator at the meeting, Mr Kum Jude Kawzu, implored community members to group themselves into cooperatives. This, according to him, will attract more benefits rather than operating as individuals.

The creation and management of a Protected Area (PA), according to the Regional Chief of Service for Wildlife at MINFOF, Mr. Nono Joseph, starts with conducting research on all the fauna, flora, socioeconomic, touristic and development potentials on the area in question. After this, the results are reported, which culminates in the preparation and transmission of a Technical Note to the Ministry of Forestry and Wildlife (MINFOF), Yaounde.

Thereafter, the Minister (of Forestry and Wildlife) signs a Public Notice seeking public opinion on the creation. Adjacent communities to the proposed protected area and stakeholders in all subdivisions surrounding the concerned area, are also sensitised.

When this is done, chiefs in villages around the proposed protected area append their signature accepting the creation of the area. A formal report is then constituted by MINFOF and submitted to the Prime Ministry, where the Prime Minister then issues a decree classifying the area as protected.

Regarding the gazetting of the Proposed Mak-Betchou Wildlife Sanctuary, the Southwest Regional Chief of Wildlife said the creation process commenced in 2010 with surveys and bio-monitoring conducted by the Environment and Rural Development Foundation (ERuDeF) between 2010 and 2014. The research recorded four direct sightings of groups of chimpanzees and 1,346 chimpanzee nests, 178 observations of elephant signs and signs of other mammals.

“Based on these biodiversity potentials, the Ministry of Forestry and Wildlife initiated the classification of this area as Wildlife sanctuary with the support of ERuDeF in 2014. Technical Notes were prepared and forwarded to Yaoundé in 2015,” Mr Nono Joseph said.

He disclosed that that the gazetting process for the proposed wildlife sanctuary is now at Technical Note phase. Mr. Nono beseeched the chiefs, elites and community members present, to device a positive measure that will hasten the completion of the steps. It is in this regards that the chiefs, traditional rulers and elites of the Lebialem Division drafted a petition, which will be sent to the Ministry of Forestry and Wildlife advocating for the speedy gazetting of the Mak-Betchou rainforest.

The meeting for the engagement of key actors in the creation and management of the proposed Mak-Betchou Wildlife Sanctuary, was organised by ERuDeF under the auspices of the Ministry of Forestry and Wildlife with financial support from the Rainforest Trust-USA.