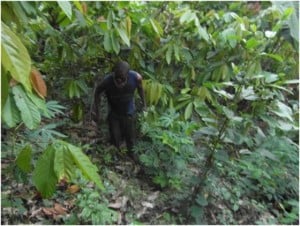 Farmers living in villages adjacent to the Mt. Cameroon National Park have begun transforming their cocoa plantations into forests of threatened trees.

The farmers were inspired during a series of trips conducted by ERuDeF staff, between May 3-15, 2015, working for the Conservation of Threatened Trees of Mt. Cameroon Program, in collaboration with local government services and local communities.

Having grasped the economic values of the threatened trees, Ngombo Moses, 64, of Bafia village in Muyuka Subdivision, who benefited 450 seedlings of Prunus africana and planted them in his cocoa farm, said he would cover a greater part of his land with species of threatened trees.

“Even though I planted them inside my cocoa farm, I intend to do away with the cocoa crop when these trees grow to overtake cocoa. I will clear the cocoa plants so they [threatened trees] can survive,” Ngombo said, “I know these trees take long to mature as compared to cocoa but cocoa will serve me in the short run. So I need just a few stands of cocoa for short-term income and more important trees for a longer term.”

He said he is assured of the welfare of his wife and children even in his absence. His farm recorded 75% survival rate of the threatened trees he planted and added, “I planted them 10 metres apart and in lines to ease the work of labourers I might hire for weeding. For now, I have already ringed the plants.”

Ngombo said he adopted the pattern to help him conduct proper monitoring.

Another farmer from the Bonakanda community, Mbake Lyonga, who equally benefited from the donated threatened trees, said he feels happy because the trees will help him in many ways.

“I am a bee farmer and these trees serve as shade for my bee hives. Like the trees themselves, flowers, especially from Prunus africana, are a very good source of nectar for bees and I intend to produce quality honey for consumption,” Mbake said.

He expressed gratitude to ERuDeF and her partner, Fauna and Flora International, (FFI) for such a great initiative of raising and distributing seedlings to farmers.

Mbake manages an NGO in Bonakanda which cultivates honey for commercial purposes.