192 Million Spent On Reforestation In SW, Yet Realization Remains Gloomy 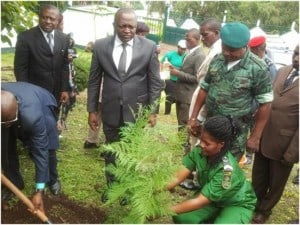 The government of Cameroon has since 2012 spent over 192 million francs cfa to implement measures put in place in 2006 to ensure reforestation in the Southwest Region, yet results on the ground remain dismal with a mere 8% success rate recorded.The Governor of the Southwest Region, Bernard Okalia Bilai, has blamed the incredibly low realization of the reforestation policy on the misuse of funds by stakeholders.

Okalia Bilai was speaking June 19, 2015, at the premises of the Delegation of the Ministry of Forestry and Wildlife while launching this year’s tree planting campaign.

“The evaluation and monitoring reports of the technical services indicate an achievement rate of 42% and a success rate of only about 8%,” said Okalia.

These figures are at variance with the amount of money granted to councils, NGOs and CIGs by the government which have increased significantly over the past years from 44 million in 2012, through 77 million in 2014 and 71 million in 2015.

According to the Governor, these results demonstrate the misuse of public funds granted for reforestation especially as the management of forests had been decentralized to the councils since 2006. The Governor, however, congratulated those councils and NGOs that achieved their reforestation objectives for 2014 and encouraged them to do same for the 2015 campaign.

He said government is making efforts to ensure the active participation of the local population in natural resource management, regeneration as well as participatory management of the nation’s forest resources.

Meanwhile, the Southwest Regional Delegate of Forestry and Wildlife, Eben Samuel Ebai, reiterated the theme for the 2015 tree planting campaign which is “Development of plantation forests responding to the needs of the people and the management of alien species.”

He said the ceremony was meant to put in place the modalities for reforestation grants.

Since reforestation has to be done in partnership between the different stakeholders in order to achieve the set objectives, the Delegate called on the Divisional Delegations of MINFOF, partners in conservation, civil societies and other stakeholders to work in close collaboration more than they have ever done before for the realization of those objectives.

He reminded all beneficiaries of the reforestation grants that the funds put at their disposal are public funds, and that they would be held responsible in case of misappropriation.

The Delegate said that a team from the Southwest Regional Delegation of MINFOF would be sent to the field for evaluation of the projects.

The team would monitor all activities for this year to ensure proper execution and their success.