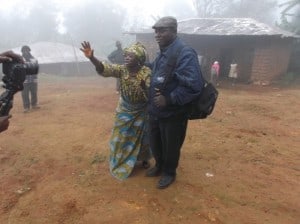 [/one_third]Two short films on the conservation of the endangered Cross River Gorilla are due to be released at the end of July 2015. The films will be screened alongside five others in schools and communities across the Northwest and Southwest Regions of Cameroon, as a tool to foster sensitization efforts for the conservation of Cross River gorillas and their habitats.

These two films are part of a series, Gorilla Folk Films from the Cross River Delta, are aimed at educating communities on the threats that Cross River gorillas face in Cameroon and Nigeria, where they are endemic. They were shot in Besali and Mmockmbie in Lebialem Division; communities adjacent to the newly created Tofala Hill Wildlife Sanctuary.

The first short film, ‘The Illegal Exploiter’ was shot in Besali, while the second, ‘No Gorilla, No Development’,was shot in Mmockbie with the local people as actors.

This gorilla folk film series is produced in collaboration with the University of Colorado USA and Wildlife Conservation Society (WCS) with the Support of Fauna and Flora International (FFI), for the enhancement of the conservation of Cross River Gorilla and its habitats in Cameroon and Nigeria.

The first phase of the project was executed in August 2014 with Project Manager, Adam P. Herman, from the University of Colorado, USA, which saw the production of five short films on gorilla threats in the Northwest and Southwest.

This phase gave the communication team of the Environment and Rural Development Foundation (ERuDeF) some experience to continue with the project.

Meanwhile, plans are underway to continue making such folk films with many other forest communities for other endangered animals and threatened wildlife species and conservation situations in the country.