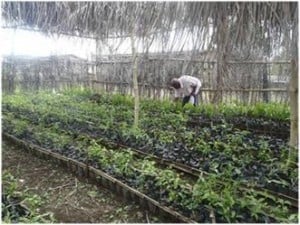 [/one_third]In a frantic effort to save the disappearing globally threatened trees of the Mt. Cameroon forest area from going into local extinction, the project for the conservation of the threatened trees of Mt Cameroon was launched in 2011. Four years down the lane, 15 of these trees identified, have been undergoing a restoration initiative and though this initiative has not reached its full recovery, the potential for full recovery is underway.

The flagship species of this restoration project is the Tiger wood (Microbellinia bisulcata), which is not only critically endangered but also endemic only to the Mt Cameroon area and no other place else in the world. This by illegal logging and habitat destruction for agricultural land.

The restoration initiative project cycle was launched after the completion of the desktop analysis and the identification of the potential candidates for restoration. The entire mountain area, including the surrounding reserves and forests were surveyed. Of the 32 species initially identified, only 15 were located in the Mount Cameroon forest area, meaning that the other species may have potentially gone extinct and or not suitable for restoration.

[/one_third]Increasing stakeholder and community ownership of the project is being achieved through the involvement of key partners such as the Mt Cameroon National Park, the Regional Delegation of Forestry and Wildlife and the local communities. These various stakeholders have been receiving support from the project in the different domains which include but not limited to training, planting and monitoring and surveillance. In addition, economic tree species have also been introduced in order to increase local community motivation for the project and their ownership potentials.

In order to provide a long term future to the remaining trees, a 50.000-nursery capacity had been established at the premises of the South West Delegation of the Ministry of Forestry and Wildlife (MINFOF) and four other separate community locations Bova I (Buea cluster), Bomana (Bomboko cluster), Bakingili (West Coast) and Bafia (Muyuka cluster) to raise the seedlings and seeds that were being collected from the forest.

At maturity, both the threatened and economic trees in nurseries are being distributed to the farmers to plant in their farms. On the other hand, the National Park is planting most of the threatened trees in such areas as the park boundaries and inside the degraded areas of the Park. The surrounding community forests and reserves are also being supported through tree planting and development of planting and monitoring plans.

From a rapid survey conducted to measure the impact of the project on the local beneficiaries, the reactions were diverse.

Quinta Ambi, Coordinator of “Struggling Women, Bakingili, said the workshop was of great help to her because she has a kola nut nursery.

“I will study these trials and see the performance of species in each of them in order to apply in my nursery. I will equally add threatened trees to my nursery after a good protocol is arrived at,” Ambi said.

Mosisa Simon, the nursery assistant of Bova I, indicated interest to try all the methods himself. “My wife has a Prunus nursery behind the house. Right away, I am going to conduct this same activity there with her to see which protocol she can subsequently be using to improve propagation in her nursery,” Mosisa said.

He promised to add mahogany and other threatened trees in his wife’s nursery after attending the workshop.

The chiefs of beneficiary communities pray that the program continues with the donation of trees because it will regenerate their forests and restore the population of some species, which have become rare for the future generation.

In spite of the major successes being realised by this project, its major challenges include but are not limited to increasing illegal logging (of many of the threatened trees species especially the Microbellinia bisulcata), deforestation, absence of full management inventory of the species and limited monitoring of the species by the officials of the Ministry. Illegal logging pressure has now been moved from the “Bubinga” tree species to the Tiger wood species.

At the forefront of these restoration efforts, is one of the emerging conservation non-profit in Cameroon, the Environment and Rural Development Foundation (ERuDeF) that has been in this region for over a decade. The project is supported by the Fauna and Flora International/Global Trees Campaign Programme and the Ministry of Forestry and Wildlife of Cameroon.