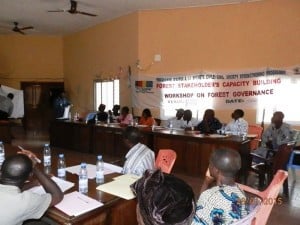 An agreement signed between the government of Cameroon and the European Union (EU) is shaking the very foundations of logging business in the country, by getting communities in forest concession areas map out their customary lands and resources.

The Voluntary Partnership Agreement (VPA) was signed as part of a larger scheme to facilitate forest law enforcement, governance and trade in timber products (FLEGT) aimed at setting up a system to check the legality of timber products (timber legal assurance system; TLAS) in the Congo Basin.

The VPA is based on the fact that a country agrees to issue a FLEGT licence for any timber and timber products that it sends to the EU, certifying that the timber is legally produced according to the laws of the country of origin.

The FLEGT regulation adopted by the EU in 2005 states that timber products from a country with operational VPA must be accompanied by a FLEGT licence if they are to enter the EU market.

Ghana became the first country to complete VPA negotiation with the EU in 2009, followed by Cameroon, the Central African Republic, and Congo.

Indonesia and Liberia have also finalized a VPA. 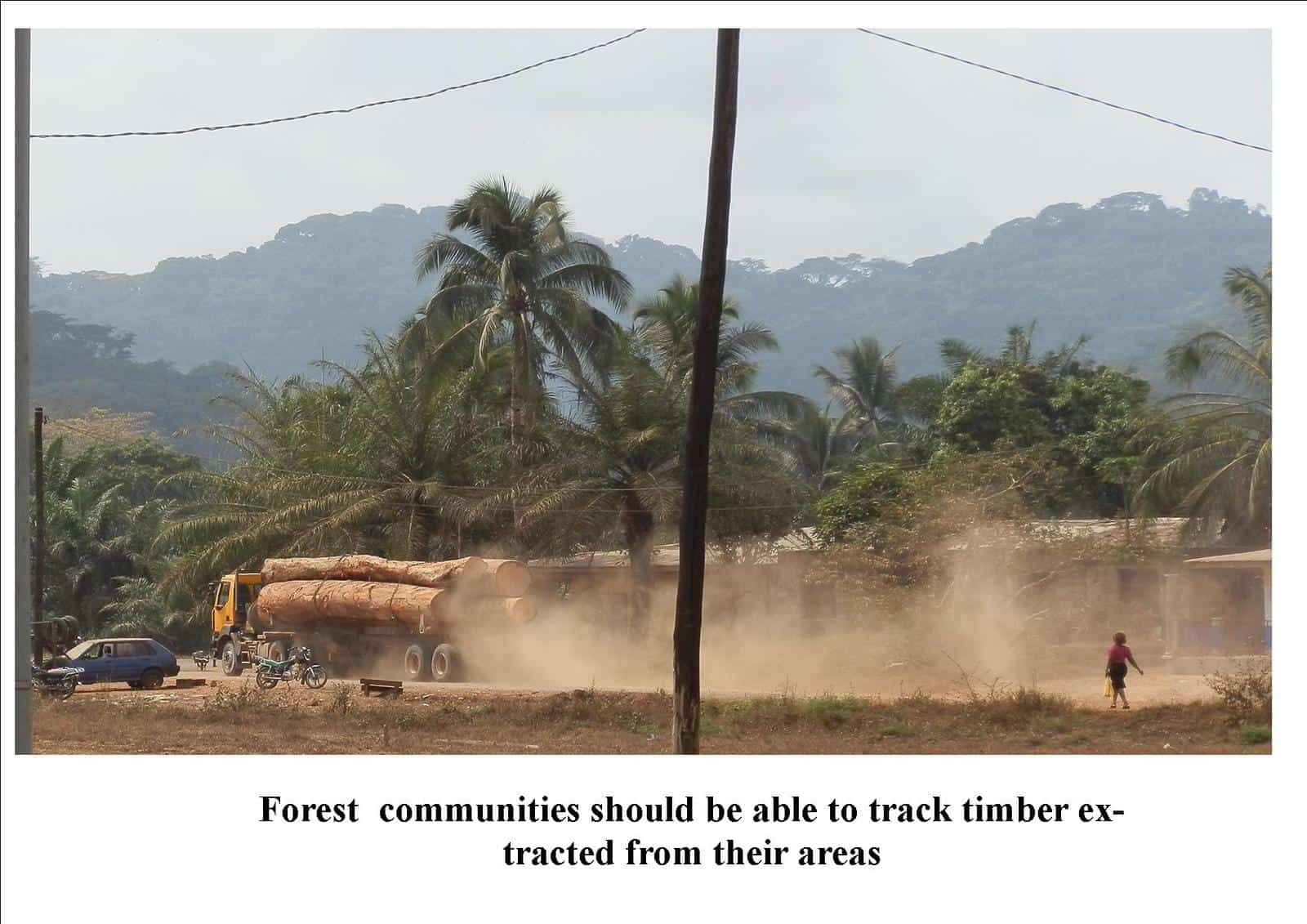 In Cameroon, in the South West Region, AJESH in partnershipforest communities with Nature Cameroon trained some selected forest communities in Konye, Nguti and Eyumojock on forest governance with focus on VPA-FLEGT.

The workshops, which lasted three days each, had the following objectives to fulfil: to enhance communities’ knowledge on the VPA-FLEGT (Forest Law Enforcement, Governance and Trade) process; to make communities have a better understanding of monitoring illegal forest practices, understand some basics in group dynamics, and agree and take the commitment to join the government in the fight against illegal practices in the forestry sector by independently acting as external monitors.

Cameroon is blessed with plush tropical rainforests where loggers exploit abundant timber. But much of the trade in timber remains hectic and badly governed usually resulting in little impact on the communities in forest concession areas due to industrial-scale logging, illegal and ruinous exploitation. Besides, the state of Cameroon loses huge volumes of revenue through illegal logging.\

The Cameroon-EU Voluntary Partnership Agreement therefore, hopes to provide moves towards more people-friendly forest policies in the region and transfer significant land rights and resource benefits to local communities while assuring that the government of Cameroon also benefits from the Eyumojokcommercialisation of timber.

The VPA also intends to provide policy-makers and development practitioners with handy and practical new approaches to community-based forest management, which allows forest communities to establish and enforce rules governing the access and use of forests and other resources.

At the training sessions, Timber Legality Assurance System (TLAS) was focused upon as viable means of distinguishing forest products of lawful origin from those of unlawful origin, based on the definition of legal timber laid down in the text.

“It makes it possible to ensure, at anytime and anywhere within a country, that only timber produced or acquired legally is in circulation, and may be granted a FLEGT licence when required,” facilitators told participants at the workshop.

The EU’s interest in the entire process is to ensure that illegal timber no longer enters the EU market, “when forest communities would have properly mapped out their resources and are able to track wood from the forest to the harbour; collect data at critical control points, keep records of all data involved in the harvesting and processing of timber, reconcile data to verify logs from legal sources and ensure that a FLEGT license is issued for sales in EU member countries.”

Over 90 participants attended the training workshops on forest law enforcement, governance and trade.

In their opening speeches, Divisional Officers for Konye, Nguti and Eyumojock exhorted the government through the Ministry of Forestry and Wildlife to continue supporting civil society organizations in their pursuit to sensitize local communities on the importance of sustainable forest exploitation.

Referring to the FLEGT and VPA, facilitators at the workshop reiterated the challenges on data analysis of the forestry and the factors that promote illegal logging such as unfair and insecure rights to own and access forests, corruption that undermine law enforcement and exclusion from decision making of communities that depend on the forest. 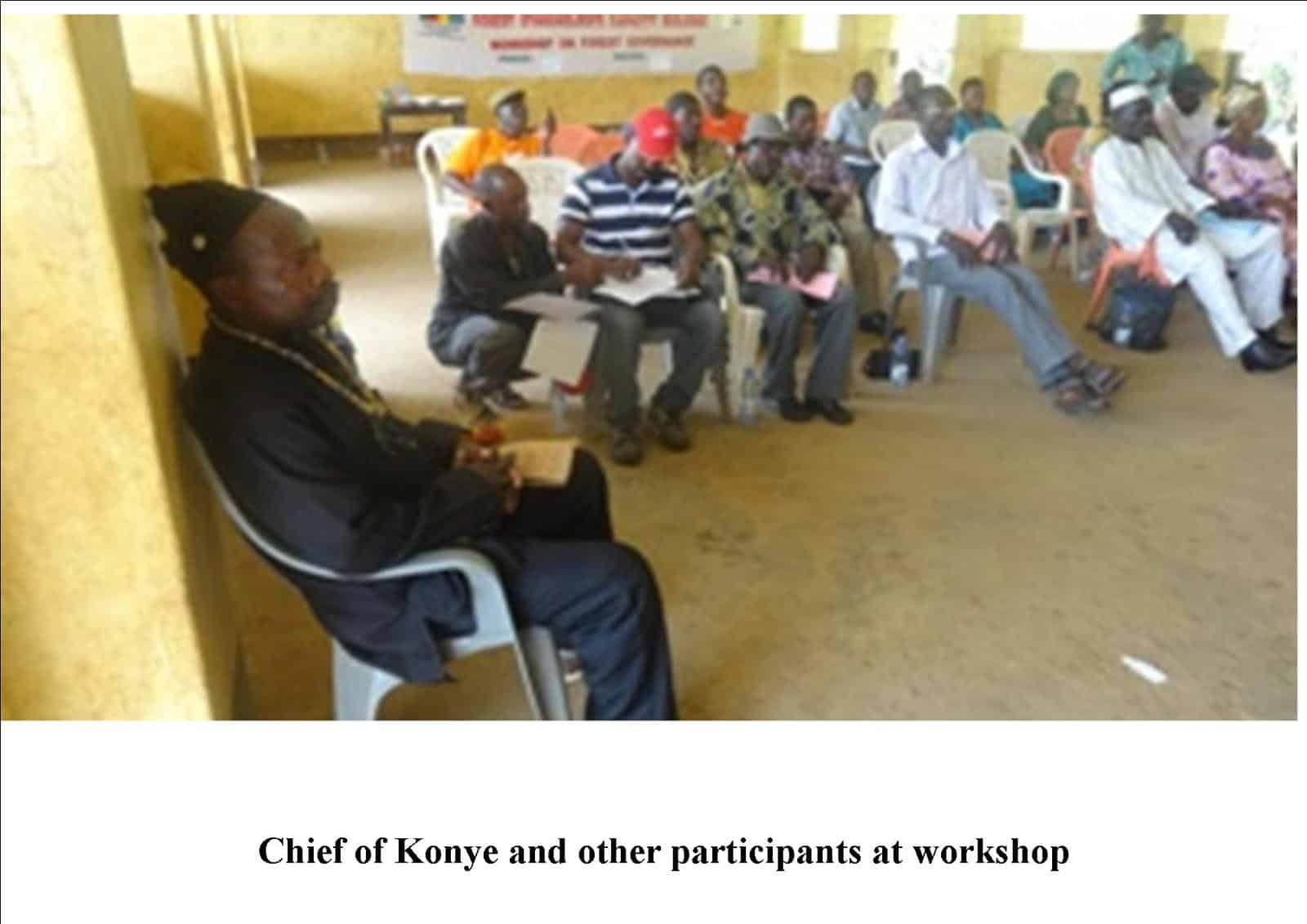 Participants learnt that timber companies and business Cheifassociations in the EU have changed their practices in response to the EU’s initiative.

The participants also learnt the types of securities and logging permits issued; forest concessions (Forest Management Unit), council forests, sales of standing volume, community forests, permits for recovery of wood, authorisation for removal of timber (AEB) and the personal timber licences as well as the exploitation of timber licences (PEBO), the operating permits for special forest products (such as ebony) operating licences of firewood and poles.

Communities were also drilled on what they should check before the start of logging; map of the forest that the operator will use, authorization for logging, attestation of hard boundaries between forest exploitation and land for village use, among others.

The communities should check during logging if the stem of harvested trees are labelled with the name of logging company, name of the title number, number of worksites (DF10), felling number and the date of felling; if the felled trees are marked and hammered; the company has not cut below diameters allowed; if the title number used is the same as that presented to the village during briefing, if the workers of the company are not poaching, and many others.

Overall, for the villagers who attended the workshops, it was a whole new foray into the sophisticated technology of GIS monitoring, and the realisation that they are beginning to find their voices in the management of their forest resources.