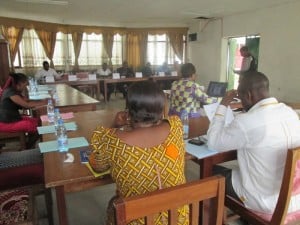 Isolated threatened trees subpopulations of the Mount Cameroon area will henceforth be linked through biological corridors. This is the major resolution from the validation workshop of the distribution of threatened trees of Mt Cameroon area. The validation workshop took place recently at the conference hall of the SW Regional Delegation of Forestry and Wildlife in Buea.

Speaking during the validation workshop, the SW Regional Delegate for Forestry and Wildlife, Samuel Eben Ebai appreciated ERuDeF for supporting MINFOF in conserving threatened tree species of Mt. Cameroon. While encouraging stakeholders to tackle threats from their root causes or drivers, the Delegate said the workshop report would serve as a working document that will enrich the data base and provide scientific information that can be forwarded to the Minister for an eventual ban on the exploitation of Microbelinia bisulcata and other threatened tree species.

The resolutions arrived at were that ERuDeF consult the national inventory database on the distribution of threatened tree species in Mt. Cameroon to confirm their statistics, that effective control against illegal logging be intensified in Forest Reserves hosting Microbelinia, that hotspots for illegal activities be identified and measures put in place to minimize them, that sensitization be extended to all stakeholders including user local communities, that a management inventory on threatened species in each site be done in order to update the data base, that support be given to local councils and other stake holders to encourage the regeneration of threatened tree species, that the file for the management of the Mokoko Community Forest be reinitiated, that Chiefs of Post be assisted in the monitoring of threatened tree species, that the project should identify and tag mature trees of interest that will not be fell in the existing forest management concessions and that a Memorandum of Understanding be established with the forest exploitation companies on the sustainable management of these trees.

The Coordinator of the Mount Cameroon Threatened Trees Project, Ms Limbi Blessing, explained that the 4 maps produced showed the spatial distribution of key endangered species of Mt. Cameroon, the spatial distribution of Microbelinia in the Mt Cameroon area, the of phenology of Entandrophragma angolenses and the phenology of Microbelinia bisulcata in the Mt. Cameroon area. According to Ms Limbi Blessing, isolated populations of threatened trees of Mt. Cameroon will be linked through the creation of biological corridors.

From 2015, the project will proactively engage all its stakeholders from the range of stakeholders that include the local councils, different user groups, chiefs, and communities, regional and central administrations of the relevant Ministries to ensure that the project objectives are fully accomplished. A robust monitoring and control plan will be implemented and illegal loggers arrested and punished according to the regulations in force. The project will continue to give mentorship and backstopping to the key local stakeholders including the Mt Cameroon National Park, local councils, regional brigade, and community forest management teams.

Given the new and emergent threats posed by the rapidly rising urban population around Mt Cameroon and its nearness to the Douala cosmopolitan city, the composite human pressure on the key biodiversity species of this biodiversity hotspot is serious and need urgent attention. Some of the key threat factors include illegal logging, conversion of forest to agricultural land and inappropriate management and regeneration. According to the President/CEO of ERuDeF, Louis Nkembi, it will take effective contributions and collaboration from all stakeholders to provide a long term protection to the threatened trees of Mt. Cameroon area.

To conclude the workshop, the Delegate recommended that the resolutions be taken into serious consideration given the importance of the species under consideration.

‘I want to thank ERuDeF for assisting MINFOF in protecting the threatened species of Mt Cameroon. A lot of work has been done since last year to improve on the number of tree species in the forest reserves. The maps have identified areas where the species are found, so for now I would say these maps are a working document to enrich our data base. This validation workshop is to produce a document that will specify or give us information on how the tree species are distributed around the Mt. Cameroon area. All of us are aware that of late there has been an over exploitation of Microbellinia bisulcata, so we want to come up with a strategy on how to handle this challenge’ said the Delegate.

This project receives financial and technical support from the Fauna and Flora International (FFI)/Global Trees Campaign and the Ministry of Forestry and Wildlife of Cameroon.