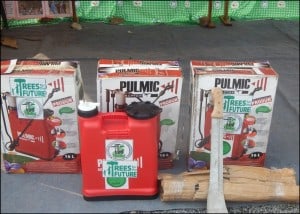 Some four farmers from different agroforestry farming groups in the Southwest Region, have been rewarded with modern farm equipment. The farm tools consisting of spraying cans, cutlasses, hoes, amongst others, were handed to the farmers at the end of the Southwest Regional Agro Pastoral Show, which took place in Buea, December 19, 2016.

The farmers showcased their produce to the amazement of the general public who were attracted to the quality of the yields. Many combed the stands of these farmers, purchasing their goods and also inquiring how they can adopt the agroforestry technique of farming.

“I am excited and at the same time surprised to be selected as the best winner amongst all the farmers who had been practicing agroforestry. I have been working with ERuDeF for the past four years. I have mastered their method of farming and I do practice both live fencing and alley cropping in my farms. Apart from the huge yield I get in my farms as a result of this farming method, today I have been highly recognised. I received a sprayer and five cutlasses. These equipment will greatly improve on my farming activities as well as alternate the money I was to use to purchase the tools be used for other things,” Madam Nayo intimated.

Other laureates who benefitted from the prizes promised to use the equipment in their various farms so their subsequent harvests will be huge. Meantime, other curious farmers not practicing agroforestry, inquired on how to effectively carryout agroforestry systems in their farms. Many left with the positive impressions, promising to upgrade their farms with modern agroforestry techniques.

The farmers present were promised even bigger awards in the nearest future. The ERuDeF agroforestry coordinator for the Southwest, Mr Emmanuel Ngome, urged the farmers to greatly put into use, the various tools and techniques they have acquired from ERuDeF, into practice. He announced the donation of seeds and seedlings of agroforestry, medicinal, and fruit trees in the nearest future. This, he indicated shall go a long way to upgrading the farms of these farmers.