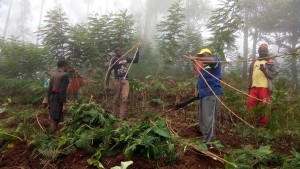 [/one_third]The Agro-forestry Coordinator for Lebialem at the Environment and Rural Development Foundation (ERuDeF), Ntungwa Elong, has trained farmers in the Menoua and Lebialem Divisions of the West and Southwest Regions of Cameroon respectively on best farm management techniques.

During the training that took place recently, participants were thought on how to prune the leaves of these trees and use for the mulching of the farm for it to decompose as organic fertilizer.

The Agroforestry Coordinator enlightened farmers that agro-forestry trees species like Acacia, Leucaena and Calliandra are not only for soil restoration and the protection of the environment but they could also serve as pecks for bean, yam and tomatoes during pruning of the alley cropping.

“Besides using leaves of the pruned branches from the alleys for mulching of the soil, you can also use these pruned branches to peck crops like tomatoes, beans, sweet yams and even more,” Ntungwa told the farmers. 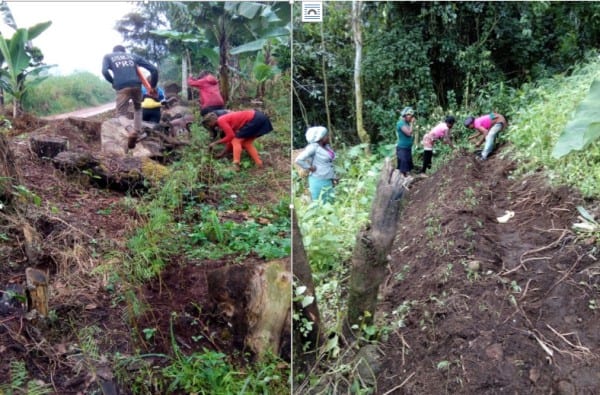 [/one_half]Meantime, the farmers showed thanked ERuDeF for the training promising to put into practice what they have learned.

“I have been using this method for some time. Unfortunately, I have not been using it well. With this training, I shall apply the method in all of my 5 hectares of farmlands,” indicated Demsoung Maurice, a farmer in Meka, West Region.

In-line with ERuDeF’s objective to restore degraded landscape and improve on the income of resourced-poor farmers in Cameroon, the organisation in collaboration with Trees for the Future-USA, established agroforestry nurseries with farming groups in Lebialem Division. Seeds of Tree species like Acacia, Leucaena and prunusafricana were handed to interested farmers in the month of March 2017 alongside sensitization on the importance of these species and training on nursery management.