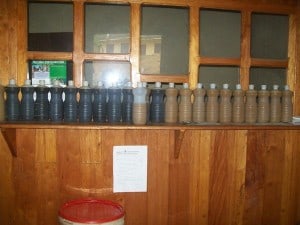 [/one_third]Over 1000 families have benefited directly or indirectly from the livelihood supported projects of the Environment and Rural Development Foundation (ERuDeF) within the last couple of years.

He said the organisation has equally focussed on poverty alleviation through training and support in the production of local soap, omo and medicated soap, Support to women groups with cassava grinding mills (Bechati&Folepi).

“Over 100 persons can be seen in petty businesses around ERuDeF project sites as a result of the skills acquired. Over 300 beehives (top cover Kenyan type) have been installed in the Lebialem highlands with a colonisation rate of over 80% an indication of over 2000 kg of honey will be produced early 2016 along site other bee bi-products. Over 200 piglets have been donated to support forest adjacent communities and the reproduction (pregnancy rate) stands at 70% meaning that early in 2017 an average of well over 500 piglets were produced given that each pig produce on average 5 piglets” he expounded.

The Social Business boss disclosed that through the activities of his Division, employment opportunities have been created either directly or indirectly in all project sites like the 4 oil mills, bi-products milling, detergent production and commercialization etc.

This to him, has increased the per capita income of the local communities

“There have been an increase in the per capita income of local community members from less than 0.05 USD per day to above 2 USD per day” he said.

Community members have confessed of increament in household income, education of their children, more hospital attention that had led to good health and increase in their standards of living amonst others thanks to ERuDeF’s intervention.

All these, according to Njom, has aided in reducing over dependence on the forest, increase in wildlife population and the protection of fragile ecosystems.