100,000 TREES TO BE PLANTED ON BUFFER ZONES OF PROPOSED TOFALA SANCTUARY 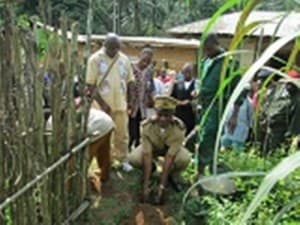 The Senior Divisional Officer (SDO) for Lebialem Division has officially launched the first phase of the Tofala sustainable land use project in Folepi Village in the Wabane Sub-division. Mr. Kouemo Simon alongside the Divisional Delegate for Forestry and Wildlife and other officials was in Folepi on June, 17, 2013 to formally kick start the project designed by the Environment and Rural Development Foundation (ERuDeF) and funded by French Charity Man and Nature.

Launching the sustainable land use practice, the SDO reminded the population on the importance of conservation. He said that conservation promotes scientific research, keeps the country’s heritage for posterity and is a huge source of revenue through tourism. Mr. Kouemo Simon traced the level of commitment of the Central government in ensuring the success of Tofala such as the signing of a public notice, appointment of a focal person at the Regional Delegation of Forestry and Wildlife for South-west, the follow up by the local MINFOF services, and the personal commitment of the Head of State in ensuring the conservation of nature through the signing of the Convention on Biological Diversity, the Nagoya protocol, etc.

In an interview with the Project Coordinator Forbe Hodu, he said that the main objective of the project is to plant about 100,000 social forestry trees and 10,000 agro forestry species on the buffer zones of the proposed Tofala Hill Wildlife Sanctuary. The aim is to improve the quality of the soil and prevent penetration into the proposed sanctuary hosting the critically endangered Cross River Gorilla and some other globally protected species. This project according to Mr. Hodu is expected to be a source of alternative livelihood to the people bordering the proposed Sanctuary and prevent them from depending on the natural resources alone.

In a closing remark, the SDO challenged the entire population to take part in the project in order to ensure success and called on the president elect of Folepi Village Forest Management Committee, the Fon to plant a tree each to symbolise the launching of the project.